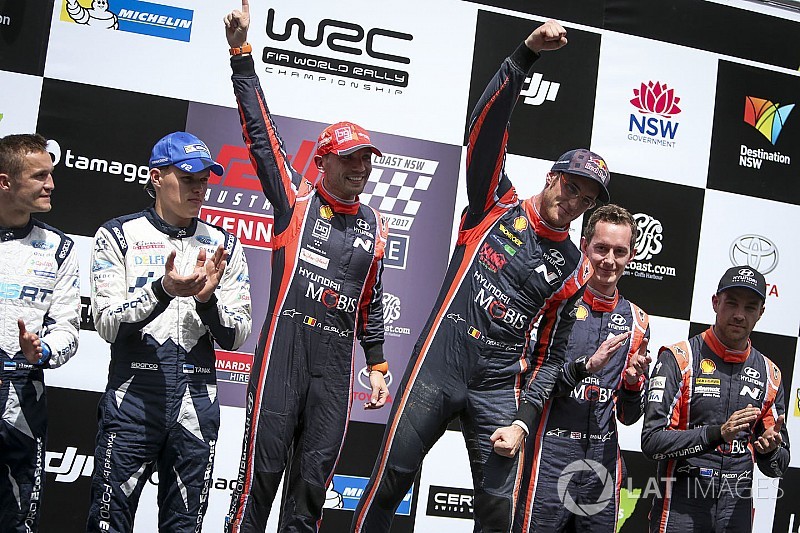 Thiery Neuville secured his fourth win of the 2017 WRC season with a straightforward run through the Power Stage in Coffs Harbour, while Jari-Matti Latvala threw away a certain second place with a final-stage crash.

Hyundai driver Neuville was given a boost when the penultimate stage of the rally was cancelled earlier today, meaning his 14.7s lead from the morning loop only had to survive the 6.4-kilometre Power Stage.

It was then put beyond doubt when Latvala made a mistake and crashed out of the final stage, the Toyota driver retiring from a comfortable second position with significant damage to his Toyota just kilometres from the end of the rally.

Neuville only had to safely navigate the Power Stage, which he did with the eighth best time to earn a 22.5s win.

"This one is a special one, this one goes to the whole team," he said. "They've worked so much during the whole season.

Latvala's crash promoted Ott Tanak to second place, the Estonian collecting his seventh podium of the season in what was his final outing for Malcolm Wilson's M-Sport squad.

"I was never thinking about it, but on the final road section I was actually thinking quite a lot," said Tanak of his emotional farewell.

"If you've been in a family for a long, long time, it feels tough. Thank you Malcolm, thank you M-Sport. It's tough to leave, but that's life."

Hayden Paddon gave his waning confidence a boost with what looked to be a solid fourth, which then became the final spot on the podium thanks to Latvala's crash.

The Kiwi, who is set to scale back to a part-time programme next season, finished up 36.6s behind Tanak and 1m28s clear of Sebastian Ogier.

"Unfortunate for Jari, it's not the way we want to get a podium," said Paddon.

"It hasn't been a great weekend for us, but to pick up a podium is a huge surprise and it's nice after the [difficult] year."

Ogier won the final stage of the season but could manage no better than fourth, and even that was helped by problems for the likes of Latvala and Craig Breen across today's stages.

There was an emotional conclusion to the Australian Rally Championship on the Wedding Bells stage as well, privateer Nathan Quinn arriving at the end of the stage in tears after wrapping up his maiden title.

The Coffs Harbour local came into the season finale well behind Subaru factory driver and reigning champ Molly Taylor, but snatched the crown thanks to Taylor suffering an engine failure during yesterday's afternoon loop.

Taylor 'heartbroken' after failure robs her of second title