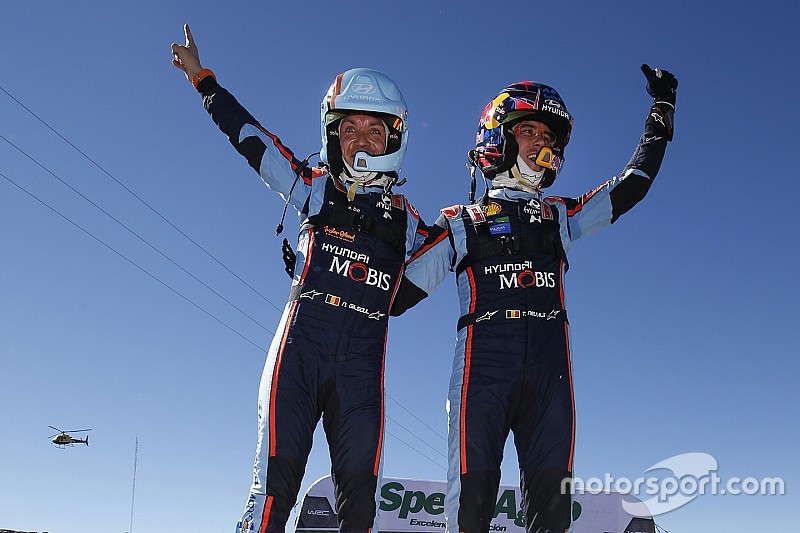 Thierry Neuville extended his WRC championship lead to 10 points with victory on Rally Argentina, heading a Hyundai 1-2 by 48.4s from Andreas Mikkelsen.

Neuville started the final day of the rally with 45 seconds in hand over teammate Mikkelsen, and kept 40.2s of that advantage heading into the Power Stage.

He completed the final test third-fastest, behind Sebastien Ogier and Jari-Matti Latvala, securing three bonus points, while Mikkelsen completed a Hyundai 1-2, 48.4s down at the finish.

A tense battle for third between Ogier and Kris Meeke went down to the wire, with Ogier reclaiming the final podium place on the Power Stage.

Having been handed a 10-second penalty for deviating from the route on Saturday morning, Meeke stormed to third on Sunday morning and entered the Power Stage with 5.2s in hand over the Ogier.

But a front-left puncture demoted the Toyota man back to fourth, with Ogier taking a last-gasp podium for Citroen.

Meeke's Toyota teammate Latvala passed Sordo for fifth on the penultimate stage, and extended his advantage over the Hyundai man to 5.6s by going second-fastest on the Power Stage.

Tanak returned from retirement on Sunday in ninth place and chased down a two-minute gap to WRC2 Pro winner Mads Ostberg, eventually pipping the Citroen driver to eighth overall by just 3.7s and taking the final bonus point on the Power Stage.