World RX prepares for final European round in Italy 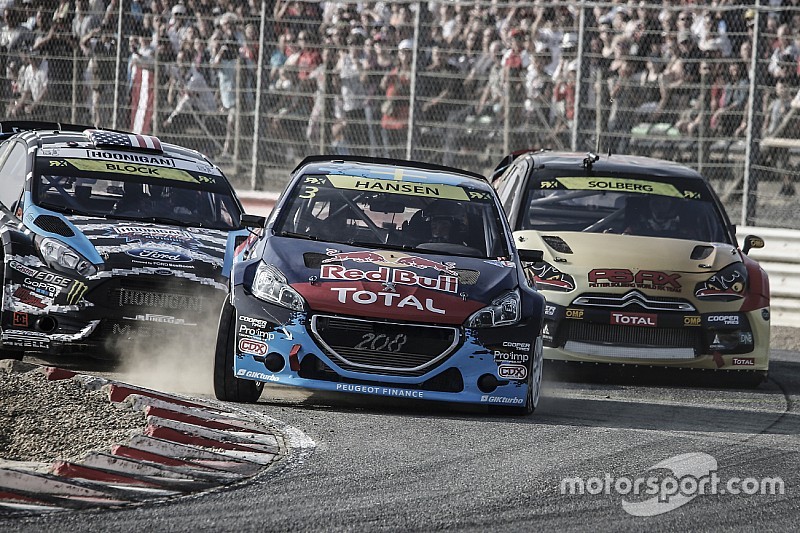 Franciacorta, in northern Italy, will form the final round of this year’s FIA European Rallycross Championship.

In the Drivers’ Championship, an enthralling battle between Petter Solberg and Timmy Hansen is brewing. Only 19 points separate the two drivers and with a total of 60 points available over the two remaining rounds, it’s all to play for in Franciacorta. Both drivers have won three events apiece but over the first 11 rounds of the Championship, Hansen has won 25 of his races compared to Solberg’s 24. Team Peugeot-Hansen is currently dominating the Teams’ Championship with a 79 point lead over Ford Olsbergs MSE. A total of 112 points are still available but if Team Peugeot-Hansen have another strong outing this weekend, it’s likely that it will wrap up the Teams’ Trophy with one round still remaining.

In Euro RX, where Italy forms the fifth and final round, it’s a two-way battle between Tommy Rustad and Jerome Grosset-Janin with Norwegian Rustad currently leading his French rival by a slender six points. In Super1600, Latvia’s Janis Baumanis looks set to take the title with a 26-point lead over Hungarian Krizstian Szabo. Meanwhile, in RX Lites, only 14 points separate leader Kevin Hansen from Thomas Bryntesson and third-placed Kevin Eriksson – whoever becomes the champion will win a Supercar drive in the final World RX round in Argentina next month.

In a bid to secure his second Drivers’ title, Solberg has completed two days of testing in his Citroen DS3 Supercar to gain valuable seat-time. The SDRX driver explained: “We have done a lot of development in the last week – we’ve worked on the geometry, the engine mapping – lots of areas. One of the places where I felt we were losing a little bit was coming out of the slower hairpins; it felt like the car was short on low-down torque. We’ve fixed that. We are planning a shakedown in Italy, just to confirm. It’s time to forget about what happened in Turkey and focus on the second last race of the season.”

Now I’ve learned more about the car, I’m at the stage where I am really enjoying the power and wanting more!

Out of the 42 flame-spitting, 600bhp Supercars competing at Franciacorta, there will be two drivers flying the flag for Italy on home soil. Firstly, former WRC driver Gigi Galli will make his highly-anticipated return to World RX. The popular driver competed in last year’s Italian RX round but has returned this year in a brand new Kia Rio Supercar. “I am very excited about creating a brand new team and car,” explained Galli. “I don’t want to talk about results yet because that would be very premature. We have a lot to do before we get to the point where you can think about winning. This is the beginning of a three-year programme, and we will be at the start of World RX in 2016.”

Joining Galli on home soil will be Formula One podium finisher Gianni Morbidelli who will drive for the All-Inkl.com Muennich Motorsport team, where he replaces Sweden’s Alx Danielsson. “I know that the World Rallycross Championship is at a very high level, but it's something new, something very exciting and very nice. I think my most difficult challenge will be driving on the gravel, something I've never done before,” admitted Morbidelli.

EKS owner Mattias Ekstrom is unable to race in Italy due to DTM commitments and so will be replaced by former British Touring Car Champion, Andrew Jordan. Jordan – who finished on the podium at last year’s British RX round – spoke of his passion for rallycross. The Englishman explained: “Rallycross is a sport I love so much and having been part of the commentary team for the last two years, it has only fuelled my enthusiasm for the sport. I haven’t been to the Italian circuit before and I know there have been some changes for this year, but I have been putting in a lot of study time to research the track from last year. My initial aim is obviously to get through to the semi-finals. With four clean heats I think that’s possible, and then my second aim is to get to the final.”

JRM Racing returns for another World RX outing with France’s Guerlain Chicherit, who made his debut with the British squad at his home round at Loheac. To prepare for his Franciacorta debut, Chicherit met with the JRM team in France yesterday so he could re-familiarise himself with the car and work on its set-up. “It was a good test and I’ve definitely got more confidence in the car,” explained the Frenchman. “When I first drove the car it was really, really impressive – the handling, the power, everything. Now I’ve learned more about the car, I’m at the stage where I am really enjoying the power and wanting more! Finishing in the top 12 is definitely my target.”

Chicherit’s fellow countryman Gaetan Serazin will compete in a Peugeot 208, the driver full of confidence after winning this year’s highly-competitive French Rallycross Championship in Dreux last weekend. Norway’s Henning Solberg will drive the Eklund Motorsport VW Beetle, having made his first appearance in the car at Barcelona RX last month.

Hungarian circuit racer Tamas Pal Kiss will make his first appearance in Euro RX this weekend when he pilots a Peugeot 208 Supercar with Hansen Talent Development. Kiss, a former Auto GP and GP3 racer, has driven in national and regional events to gain experience in rallycross this year.

Joining Kiss and the other 20 other Euro RX competitors in Franciacorta will be Norway’s Anders Braten who will make his Supercar debut this weekend at the wheel of a Drive for Life Ford Focus. “I can’t wait to get to Italy,” explained Braten, who finished eighth in this year’s TouringCar category. “Driving a Supercar has been a big dream for me, and seeing it coming true through my role as ambassador for Drive for Life makes it meaningful and fun at the same time. I’m very humbled to be the first driver to get this chance, and I will make sure to do my utmost to get a result we can all be proud of.”

From a Cooper Tire point of view

Paul Coates, General Manager – Motorsport, Cooper Tire Europe explained the challenges for the drivers at the Franciacorta circuit: “For the penultimate race of the year we visit Italy and last season this new venue proved popular with the crowds and the drivers. As we saw last year, the Cooper control rallycross tyre doesn’t just have to deal with the impressive jump, or the impacts from other cars but also debris - normally shards of carbon fibre. The design of the tyre incorporates specific materials which help improve its stregnth and durability and help protect it against damage."

Championship insight: What can happen in Italy?