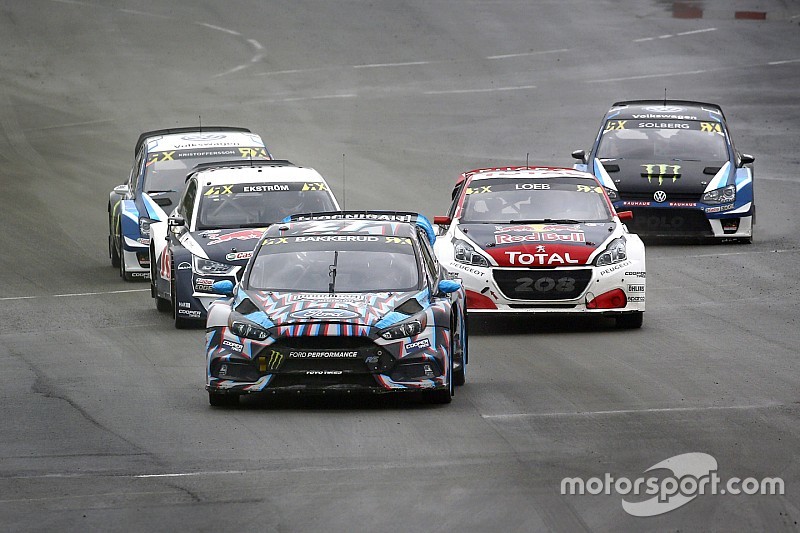 Electric cars are set to become part of World Rallycross Championship events, which could happen as soon as 2020, organisers have revealed for the first time.

Series promoter IMG has confirmed that it is working with manufacturers and the FIA on plans to introduce electric technology into the mixed-surface discipline.

“We’re talking to a number of manufacturers and working with the FIA about what it [electric rallycross] might look like,” World Rallycross Managing Director Paul Bellamy told Motorsport.com.

“It will be 2020 at the earliest but we’re in discussions about what format the concept might take, what the cars will be like and where it will sit in the World RX weekend.”

Several manufacturers have previously publicly stated interest in being involved in an electric rallycross formula, among them Peugeot, Volkswagen and Audi (which all support current teams in World RX), but it isn’t known if those marques are involved in the discussions.

“We’re looking at electric rallycross because it’s what the manufacturers are asking for,” said Bellamy. “They understand and see how rallycross lends itself perfectly to electric motor racing, because the races are over quickly and the cars being used relate to the cars that you see every day on the road.”

World RX races take place over four laps in qualifying races and six laps in semi-finals and finals. Instead of being included in the current Supercar class, electric cars will race in a separate category.

“The FIA's position is that electric vehicles and internal combustion engine cars will not race together. They can race at the same events, but not in the same races within those events,” said Bellamy, who clarifies that the existing Supercar category, in which the four-wheel drive cars are powered by two-litre turbocharged engines, won’t be affected by the introduction of an electric class.

“It’s very important for us that the internal combustion engine is here to stay in World RX. We’ve invested heavily in rallycross as it currently is, and we’re not going to walk away from that.

"The current formula is a fantastic spectacle and that won’t change, in the same way that Formula E coming in hasn’t changed Formula 1. Electric rallycross will not change what we currently have at the top of World RX.”

However, Bellamy remained tight-lipped about the finer details of potential electric rallycross regulations.