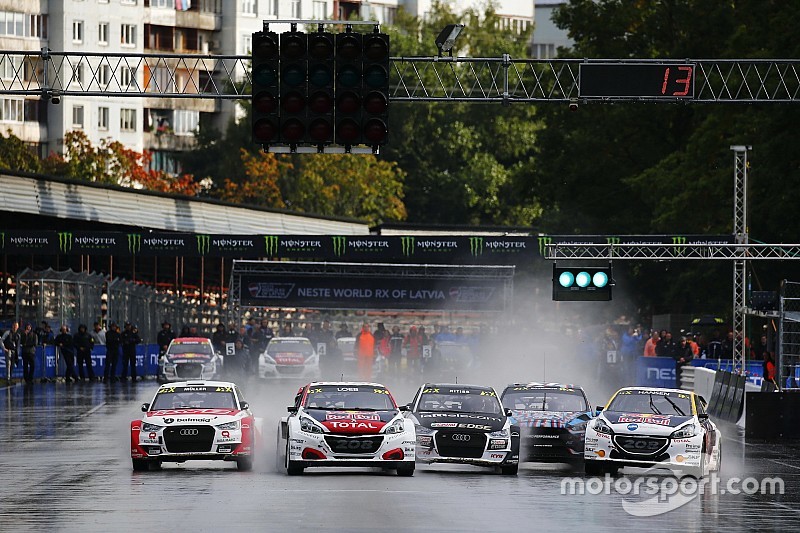 The World Rallycross Championship is set to switch to fully-electric cars in 2020, Motorsport.com has learned.

Plans for electric cars to be introduced into the World RX structure were revealed by Motorsport.com last August, but a source has now indicated that electric cars will take the place of conventional internal combustion engine Supercars in the headline category after next year.

“Fifteen cars are required to begin in 2020. Nine different manufacturers have been engaged in the discussions and negotiations so far, but the ability to buy the required components and build a car has to be open to privateer teams if they want to go that way too.”

It’s understood that the new electric cars will be based on a common carbon monocoque tub and safety structure that will be supplied as part of a chassis kit, expected to also include suspension and braking systems.

It’s believed that motors won’t be from a single supplier and neither will the composite body shells that will sit on top of the carbon chassis’, allowing for different models of cars to be used.

Those body shells are expected to be marginally wider than existing cars, and could feature larger rear aerodynamic devises.

Quizzed about the future of the existing Supercars in World RX from 2020, Motorsport.com’s source said: “Electric World RX cars doesn’t mean the current Supercars go away.

"There’s absolutely 100% commitment to keeping the current Supercars and not just as a European championship, as some form of international championship that can race outside Europe if the market dictates.”

The structure of the new cars and format is the result of multiple FIA Technical Working Group meetings over the last twelve months that have included a table of manufacturers, the FIA and World RX promoter IMG.

Leading manufacturers have recently reiterated their interest in electric rallycross.

Before Christmas, Peugeot Sport director Bruno Famin confirmed that Peugeot has increased its efforts for World RX 2018 with a view to being prepared for an electric switch.

Meanwhile, during the launch of Audi’s continued support of Mattias Ekstrom’s team in World RX last week, Audi Sport chief Dieter Gass said: “In the medium run, we hope to see electric cars being fielded in this racing series because electrification is a focus topic at Audi, also in motorsport.”

By Hal Ridge
World Rallycross
Subscribe to our newsletter