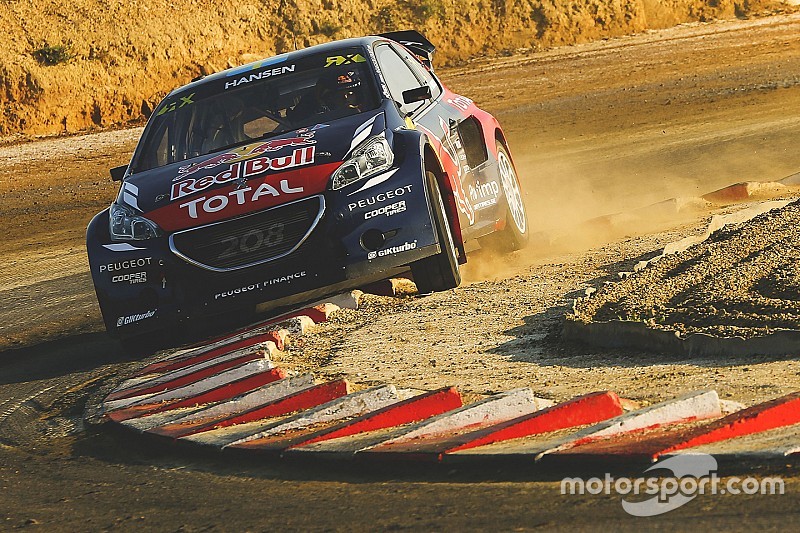 It is the fifth event in a row that the Team Peugeot-Hansen driver is top qualifier (TQ) going into the second day.

Sweden’s Timmy Hansen leads World RX of Barcelona, round ten of the FIA World Rallycross Championship presented by Monster Energy, after the first two heats. It is the fifth event in a row that the Team Peugeot-Hansen driver is top qualifier (TQ) going into the second day. EKS driver Mattias Ekstrom, who was quickest in free practice, is second in his Audi S1 EKS RX quattro. Petter Solberg and Johan Kristoffersson are third and fourth respectively.

Barcelona RX forms the penultimate round of the FIA European Rallycross Championship (Euro RX) and it’s Tommy Rustad who leads the way in his Marklund Motorsport Polo RX Supercar. Finland’s Joni-Pekka Rajala is second, one spot ahead of Hungary’s Tamas Karai. After retiring from heat two, Frenchman Jerome Grosset-Janin is tenth overnight for Albatec Racing. His team-mate James Grint had a torrid time after getting caught in traffic and crashing into a wall in heat one.

The jump is a lot of fun - it’s not very high but is spectacular for fans and photographers so it’s been designed well.

“It’s been a really good day. We’ve never been as quick as we were today,” explained day one leader Hansen. “Heat one was a big battle with Davy [Jeanney] and when we took the Joker [Lap] I came out in front. I was watching the other heats that followed which is always a nervous time but it felt great to be quickest. The second heat was good too but tough with Johan [Kristoffersson] on the first corner.

The Peugeot [208 WRX Supercar] is so quick to drive, I don’t feel I’m going that fast until I see the lap times. Unfortunately I got a five second penalty for taking a cut on the first corner. Having spoken to the stewards, I see what they mean. They acted very professionally and I was impressed with how they acted. At the end of day, I am still on top so that is what matters.”

Ekstrom was happy with third but admitted luck was on his side during the second heat. “I broke the rim and was very lucky to make it to the end of the race second quickest,” he explained, before adding: “We’ve been eating a lot of dust today. We’ve not hit jackpot but it’s been a good day and I’m enjoying this track a lot.”

Ford Olsbergs MSE driver Reinis Nitiss is fifth and admitted how much he liked competing on the newly-built rallycross track. “I didn’t think it was possible to make such a good rallycross track at a permanent F1 facility but Barcelona has proved me wrong. I really like this circuit, it’s technical and the gravel is very slippery which means you have to get the right rhythm. You need to be careful not to make any mistakes so it’s very challenging when up against five other drivers. We’ve had good pace all day and it’s good to be smiling again after a few tough events.”

Marklund Motorsport’s Topi Heikkinen, who is eighth overall after two heats, also spoke highly of the new RX circuit. “The track is awesome,” explained the Finn. “The jump is a lot of fun - it’s not very high but is spectacular for fans and photographers so it’s been designed well. I was second in free practice, but struggled a bit in traffic in the first heat. The second heat was a lot cleaner and now I just can’t wait to get back on the track again tomorrow.”

It was a similar story for American Top Gear presenter Tanner Foust who failed to finish heat one. He returned on flying form for the second heat, however, to post the fourth fastest time.

In the S1600 category, which runs alongside World RX this weekend, it’s Frenchman Andrea Dubourg who leads the way after winning two out of three heats. Krisztian Szabo is second, with current S1600 points leader Janis Baumanis third.

Tomorrow’s World RX action will kick off at 8.30am local time with warm-up for 60 minutes. Heats three and four will commence at 10am before the semi-finals and all-important final are scheduled from 1.40pm. The winners’ press conference will commence at 4.20pm.