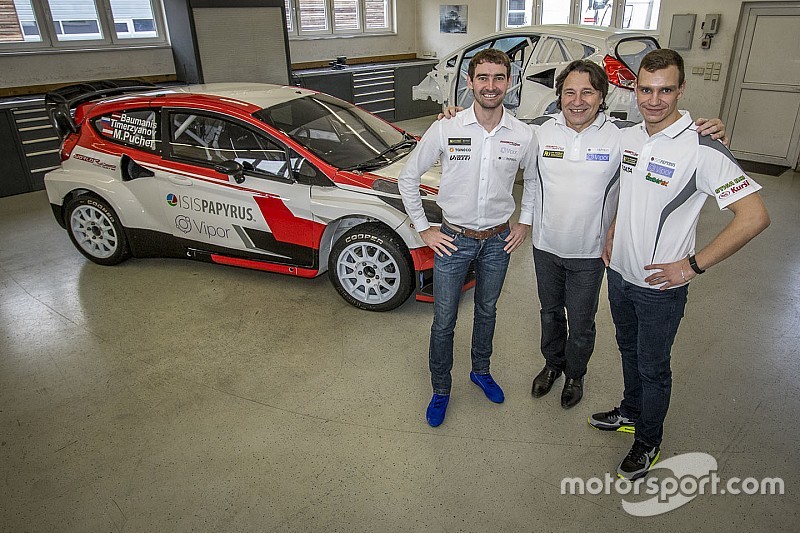 The pair will drive a brace of Ford Fiesta Supercars for the team. Timerzyanov drove a Ford Fiesta run by Olsbergs MSE last year as an individual entrant in World RX.

He will drive for Max Pucher’s World RX Team Austria outfit this season, in a Fiesta developed by the Austrian team.

“Having had several options for 2016, I made a conscious decision to join a great team with an amazing car,” said Timerzyanov, European Rallycross champion of 2012 and 2013.

“The level of the championship is growing, including team and car development, plus more fantastic drivers are joining all the time.

"I’m really happy to be a full-time member in such a dynamic team. I’m just waiting for the light to go green," he added.

Timerzyanov moves to the Austrian outfit after a single-year with OMSE, having joined the Swedish squad from Team Peugeot-Hansen at the start of 2015.

The Russian’s campaign last term didn’t live up to expectations, he only twice made the final [in Norway and Italy], his year better remembered for twice rolling his Ford Fiesta and continuing to complete the respective races [at Hockenheim and in Norway].

Alongside his Super1600 exploits, Baumanis drove a Hansen Talent Development Peugeot 208 Supercar three times last year and finished on the podium in Euro RX in Norway.

He deputised for World RX Team Austria owner Pucher at the final round of World RX in Argentina and made the team’s second ever final by finishing fourth.

“I am thankful for the opportunity with World RX Team Austria,” said Baumanis.

“It was brilliant to race with the world’s best drivers in Argentina and I was so happy that I could reach the final on my first outing with the team.

"I learned that this is a fantastic group of people and a perfect atmosphere, which made them an easy choice for 2016. Max has invested a lot into the car’s development for this year,” he added.

Pucher will compete in the five-round European Championship in a third car and select World RX events while Stohl will focus on the engineering operations of the team.

He will support MJP Racing with the running of the cars in the 12 round championship. “2015 was a tough but exciting first year for the team,” said Pucher.

“We reached the semi-finals regularly and the fact that we made the final in the last two events of the year shows how competitive both the team and car were.

"Timur and Janis have an excellent track record in rallycross and now it is our responsibility to give them the best possible support," he added.

Analysis: Could World Rallycross be next stop for Loeb?