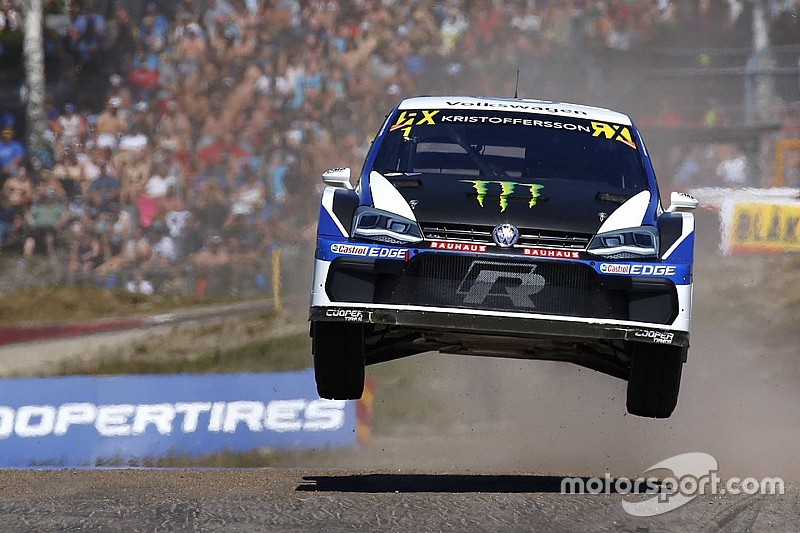 World RX Championship leader Johan Kristoffersson continued his dominant run at home turf by topping the order on day one at the historic Holjes circuit.

Kristoffersson set the fastest time in both of Saturday’s qualifiers to head the field. He took the lead of his Q1 race from the middle starting position, the reigning champion edging left on the run to turn one, making himself space to ensure track position at corner entry.

His PSRX Volkswagen team mate Petter Solberg had also led his Q1 race but had a half spin entering the chicane in the joker lap section and lost track position to Sebastien Loeb, Andreas Bakkerud and Mattias Ekstrom.

In Q2, Solberg edged former European champion Timur Timerzyanov into the first corner and pushed hard to set the fastest time. But it wasn’t enough to beat Kristoffersson, who bettered Solberg’s effort in the last race by over three tenths of a second to top the order, despite admitting to not feel totally comfortable in the Volkswagen Motorsport-built Polo.

Racing in the same races in both Q1 and Q2, EKS Audi pair Bakkerud and Ekstrom twice took their joker laps together at the first opportunity in both encounters, the S1 pilots second and fourth in Q1 then fourth and fifth in Q2.

Bakkerud, the 2016 winner of the Swedish round finished the day second, with Ekstrom, who won the Holjes event in 2014 and 2015 but missed his home last season due to a DTM clash behind Solberg in fifth.

Third was Peugeot driver Timmy Hansen, the Swede twice third fastest in the French marque’s new 208 WRX, as revealed by Motorsport.com recently, which features a new engine, chassis and transmission.

Sebastien Loeb meanwhile couldn’t match his younger teammate's pace, finishing fifth and seventh in the opening races of the weekend. He lies sixth at the conclusion of Saturday, just ahead of former Peugeot driver Timerzyanov.

The Russian was top privateer in both Q1 and Q2, driving Marcus Gronholm’s GRX team’s Hyundai i20 and is seventh ahead of the second day.

The first day of two-time DTM champion Timo Scheider’s return to World RX didn’t go well, the German twice entering the Holjes sand traps. In Q1 he was pushed into the turn one run-off by Guerlain Chicherit before his Munnich Motorsport Seat Ibiza ended its day in the sand trap before the circuit’s jump, with what appeared to be broken steering.