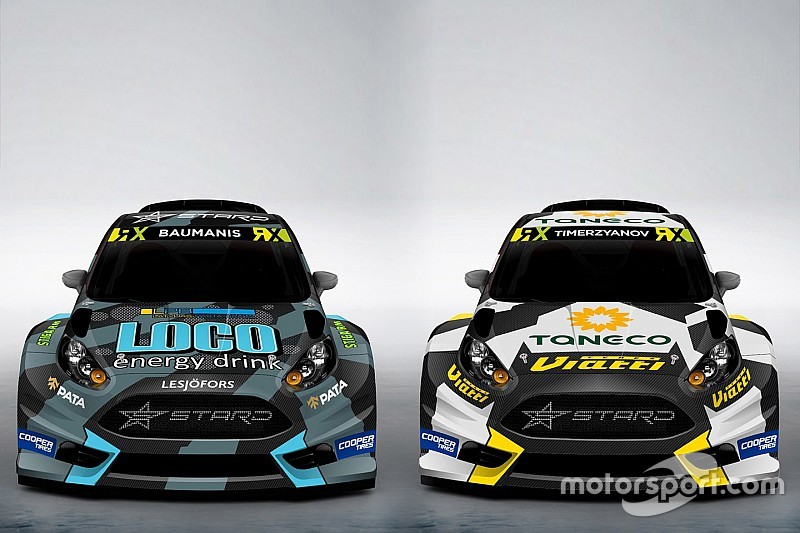 Timur Timerzyanov and Janis Baumanis will be teammates in the 2017 World Rallycross season, having signed for the new STARD World RX Team owned by former WRC driver Manfred Stohl.

The pair will race a brace of new Ford Fiesta Supercars for the Austrian team, having switched from the MJP Racing Team Austria squad that they drove for last year.

Stohl was initially involved with Max Pucher’s MJP Racing squad (then called World RX Team Austria) in 2015, driving a full World RX campaign himself, with his STARD R&D concern supplying the team’s Fiesta Supercars in 2015 and 2016. But he parted company with Pucher’s team at the start of last year.

For Timerzyanov, who claimed back-to-back European titles in 2012 and 2013, this season will mark the fourth different team he has driven for in the four years of World RX, having raced for Team Peugeot-Hansen, OlsbergsMSE and World RX Team Austria in the last three seasons.

“I was extremely satisfied with the STARD-built Ford Fiesta RXS Evo 2 I drove through the 2016 season with World RX Team Austria,” said the Russian.

“I expect that all my gathered experience and knowledge from racing the car will be very helpful in the further optimisation. I have immediately given all my input to the engineers for the new car.

"I am looking forward to a hopefully successful 2017 season, and will do everything to ensure that hopefully, my infamous “next time” [with switching teams] will be this time!”

“I feels as if I have come back home,” said Baumanis. “With Manfred Stohl’s help, I got a Supercar seat in World RX. In Stohl Group´s office I signed the contract at the end of 2015 for World RX Team Austria.

"Now, with STARD, I am back there again. I have big plans for the this season and feel very well prepared.“

"Our development engineers have intensively worked on another upgrade for the Evo 3 version, and we have two absolutely top level drivers in rallycross,”

Timerzyanov and Baumanis have already been replaced in the MJP Racing team by Swede Kevin Eriksson and double DTM Champion Timo Scheider.

Wilks to enter World RX full-time in 2017 with Volkswagen