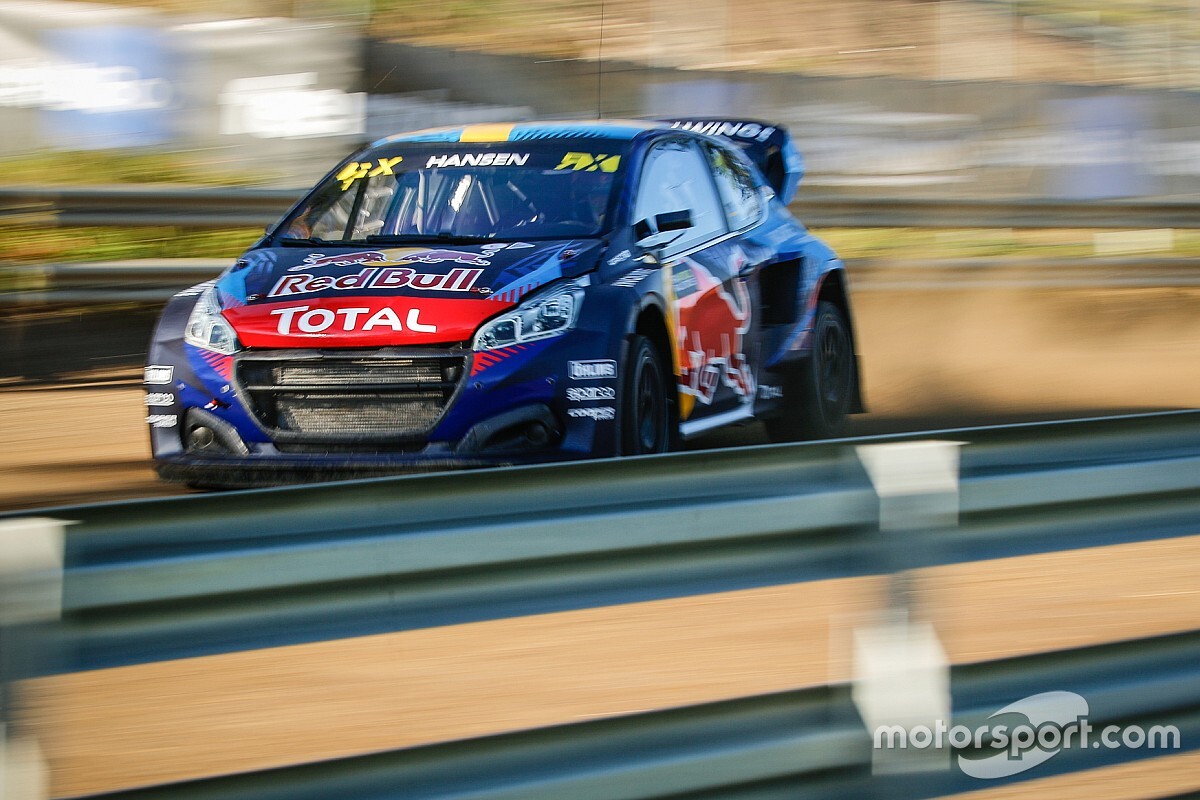 Reigning World Rallycross Champion Timmy Hansen claimed his first victory in over a year by beating points leader Johan Kristoffersson in the first instalment of the series’ Spanish double-header in Barcelona.

Hansen qualified second in the Intermediate Classification and started from pole for semi-final two, then overcame brother Kevin Hansen during the race with a superior joker lap strategy.

Series leader Kristoffersson headed qualifying, then dominated the first semi-final to secure pole for the all-important final. In the main event, the Swede survived being squeezed in turn one to lead for the opening five laps, but behind, Hansen was on a charge.

Having saved new tyres for the last encounter, Hansen chased Kristoffersson for the opening two and a half laps, as behind Mattias Ekstrom, Andreas Bakkerud and Niclas Gronholm took their jokers.

On the third tour, Hansen also took his compulsory extra route, returning to the standard lap in third, ahead of Ekstrom. He was released into second when Kevin Hansen took his joker on lap five, while edging down the gap to the race leader.

Kristoffersson dived into the joker at the sixth opportunity as Hansen moved through on the main route to take track position. Using the extra momentum along the circuit’s back  straight having exited the joker, Kristoffersson looked to the inside of Hansen’s Peugeot into the long left-hander, his Volkswagen Polo making contact with the rear of the race leader’s car. Despite smoke billowing off the rear of Hansen’s left-rear tyre, he held on through the final corners to take the win.

Kevin Hansen made it a double podium for the Hansen team, the squad having worked hard with testing in Sweden to improve its performance from the opening three rounds of the campaign.

Ekstrom’s day was hampered by clutch problems with his Audi S1 through the qualifying races. With the issue improved ahead of the event’s final stages, the 2016 World RX champion ran fourth on the opening tour of the final, and was chased into the joker on lap one by Gronholm.

A slow drive out of the final corner on lap three however gave Gronholm the opportunity to overtake Ekstrom with his Hyundai i20, and the Finn finished fourth. Bakkerud remained just behind Ekstrom to the end, the Norwegian having battled power steering issues with the Renault Megane intermittently throughout the day.