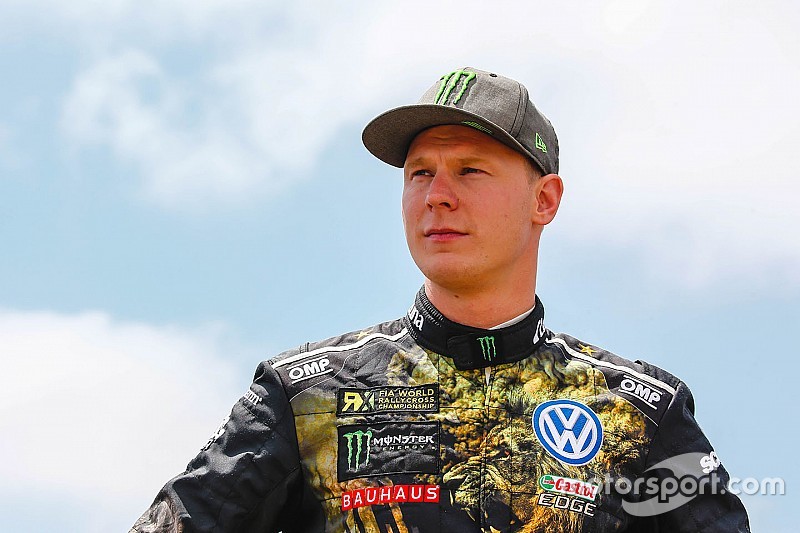 Johan Kristoffersson concluded his World Rallycross Championship-winning season in fitting style by dominating the final race of the year in South Africa.

Kristoffersson lined up on pole position and made a good start to lead into the first corner, from where he was never headed despite a fight-back drive by Timmy Hansen, who had also started on the front row by winning semi-final two.

Hansen was forced sideways and wide in the long right-hand first corner in a concertina effect of nose-to-tail contact, but unlike in his Q4 race where he saved a similar moment, the Peugeot driver lost ground, with Mattias Ekstrom and Petter Solberg climbing to second and third.

Hansen ducked out of the traffic by taking his joker at the first opportunity, and while Solberg and Ekstrom squabbled over track position to determine who would finish as runner up to Kristoffersson in the points.

Hansen set a series a solid laps in arguably his strongest performance of the season.

That push in Peugeot-Hansen's 208 WRX was good enough to not only clear Timo Scheider, Solberg and Ekstrom - when the trio took their respective extra routes - but to also run Kristoffersson close in the final stages of the race after the PSRX Volkswagen Sweden driver took his joker on the final lap.

The lost time on lap one cost Hansen a chance of victory.

The battle for second in the points came to a head in a pair of dramatic semi-finals, when semi-final one race leader Kristoffersson slowed at the joker exit on the final tour.

Ekstrom behind dived to the right to make a move, before he then had side-by-side contact with Kristoffersson's team-mate Solberg on the main lap, who had already taken his joker earlier in the race.

Ekstrom's car jumping up into the air, the Swede maintaining the position but missing the final chicane. The positions stood, and all three made it into the final.

Semi-final two was also action-packed, Ken Block initially coming out of a first-corner scrum on top.

In the final event for Block's Hoonigan Racing Division team, the American ultimately finished second in the race behind Timmy Hansen, but was later disqualified for being underweight due to losing a significant amount of his Ford Focus RS RX's bodywork in the encounter.

His place in the final was taken by Kevin Hansen, but the Swede retired immediately after the start, while Scheider finished the last race of the year in fifth behind Solberg.