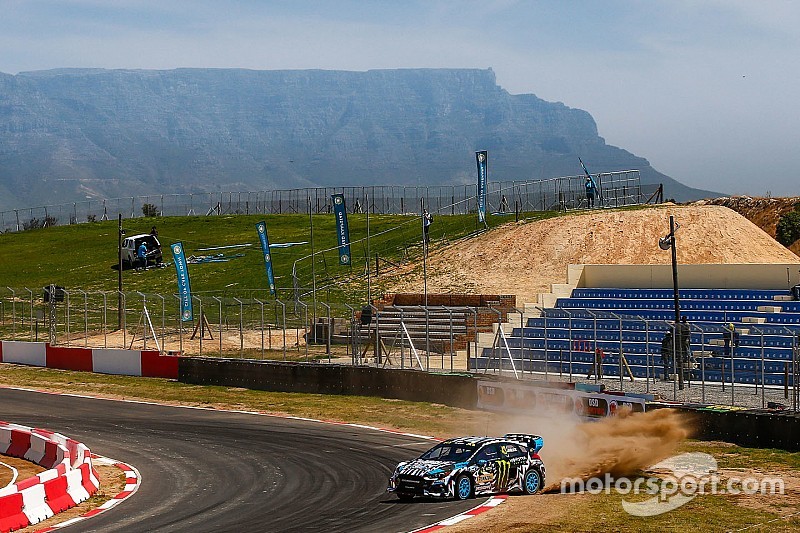 After finishing fifth-fastest in Q1, Block passed teammate Andreas Bakkerud for race victory in Q2 and then set the second-fastest time to move into top spot overnight.

Latvian Janis Baumanis followed up on recent strong form by making a brave move at the end of the long right-hand first corner to take the lead in his Q2 race and set a time that wouldn’t be beaten.

The STARD driver is second at the end of the penultimate day of the rallycross season, ahead of Q1 winner Timmy Hansen, who led PSRX Volkswagen Sweden pairing Johan Kristoffersson and Petter Solberg overall in Q1 to set the fastest time.

In Q2, Kristoffersson squeezed Hansen onto the inside in the run to the first corner but ran deep, allowing Solberg up the inside and into the lead.

Exiting the long loose-surface hairpin, turn six, on lap one, Bakkerud passed Solberg for the lead on the inside, forcing his compatriot wide. Block took advantage of the situation, gaining a position in the process.

Bakkerud led until the final lap, when like several drivers in the session, including Kristofferson, Solberg, Hansen and Sebastien Loeb, he picked up a front-left puncture.

Block was again in a position to pounce and undercut his fellow Ford driver in the joker lap section to win the race.

Solberg is ninth, with Kevin Hansen tenth in a 2016-spec Peugeot 208, one place ahead of double Andros Trophy Champion Jean-Baptiste Dubourg in a 2015-spec version of the same car.

Loeb is currently outside the semi-final positions in 14th overall, but is equal on qualifying points with Dubourg, Oliver Eriksson and Timur Timerzyanov.

Former WTCC driver Rene Munnich broke a drivetrain component on his Seat Ibiza at the start of his Q1 race but fought back by winning the first race of Q2.

Hungarian driver CsuCsu was sidelined for the duration of the day with a sickness bug.