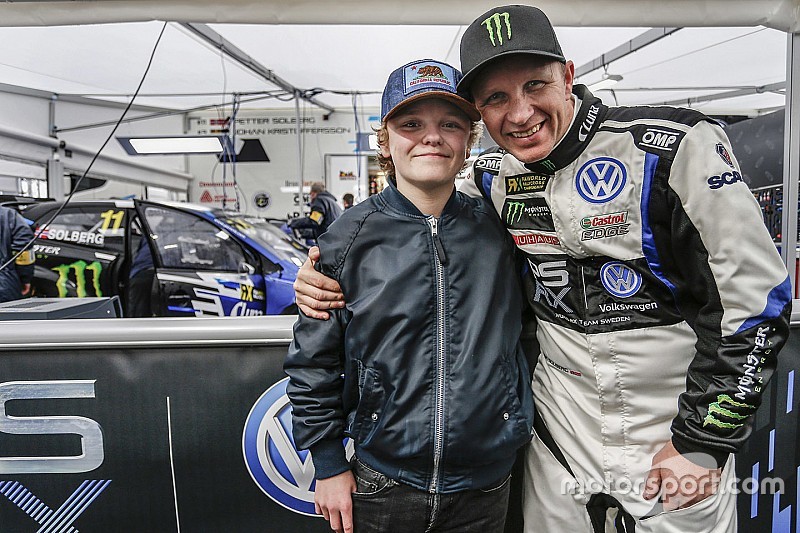 Oliver Solberg, 15, will become the youngest driver ever to race a top-level Supercar when he makes his debut at the opening round of the Scandinavian series in Norway later this month (April 22).

"I'm very excited. I drove the car at Mettet in Belgium for five laps during a test and it was really good fun. It was very fast – the acceleration was amazing," the experienced Scandinavian crosskart (buggy) racer told Motorsport.com.

"I've driven at a lot of the tracks (in the championship) many times, and being in the crosskart teaches you racing skills, so hopefully that has its advantages."

Double World RX champion Petter Solberg, who debuted a new Volkswagen Motorsport-built Polo GTi in the opening round of World RX in Barcelona last weekend, hadn't initially planned to loan the DS3 to his son this season, but agreed if Oliver could get the required license, expecting him not to be able to.

"My dad said I can borrow the car if I can fix the license, but he never thought that I could fix it," Solberg Jr said. "I called the Swedish federation, but I have to have a Latvian license because of my rallying. For the national license you can start in the year that you turn 16."

Solberg Jr's 16th birthday will be on the weekend of the final round of the RallyX Nordic Championship (September 23) meaning he will race in the whole campaign aged 15.

"I'm a little bit surprised because it was not planned that he should do it really," Petter Solberg told Motorsport.com.

"I never thought he would get the license. I was a little bit stupid there but he has tested the car and he seems to be working well, so why not. I have the car and the parts so I'll let him drive for one year. He wants to do rally, I just want him to follow his dreams and find his own way."

Solberg Jr will race the rallycross Supercar alongside his current rally programme in Latvia, where he is following in the footsteps of several other drivers that have travelled to the country to compete as a Junior driver.

"Rally is my main priority; my plans are just to race the Supercar this year, then continue with rally mainly after."

Solberg Jr will test the DS3, which remains in the same specification as his father completed the World RX Championship with in Argentina last year, on two different circuits this week, on Wednesday and Saturday.

"If I get good tests and I can learn a lot, I think I can have a good chance. There is no pressure, I don't think about what results my dad has done. I just learn from him and try to develop my own skills."