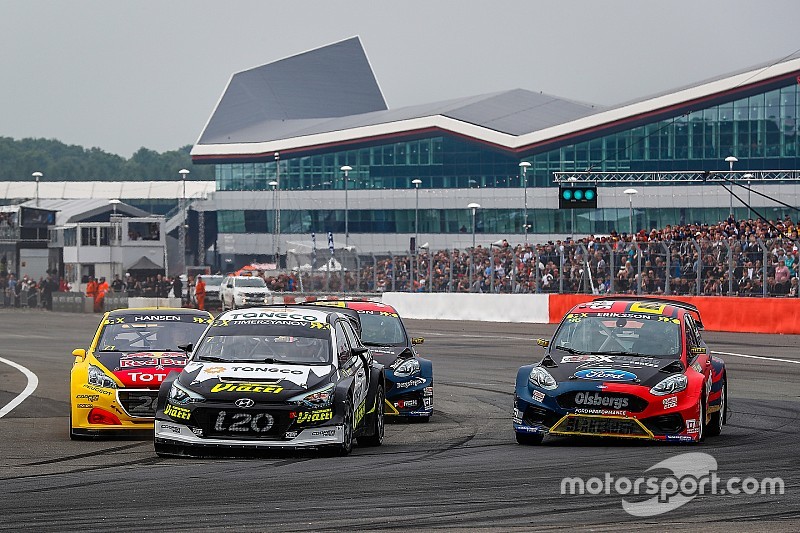 Silverstone’s World Rallycross Championship event could include over 50 Supercars in 2019.

The British World RX round was held on a new circuit at Silverstone for the first time this year, the Speedmachine Festival including the opening round of the Americas Rallycross Championship and RX2, the single-make support category to World RX.

But series promotor IMG has revealed to Motorsport.com that the event is likely to feature on the European Rallycross Championship calendar next season.

In recent years Euro RX has run alongside the headline World RX class at five rounds. Currently, World RX entry numbers are capped at 25, while Euro RX entries are capped at 30.

This season, Euro RX Supercar has been either full or almost full at all rounds, meaning over 50 Supercars could be in action at Silverstone next year.

“We’re working on the Speedmachine concept to make the event bigger in every angle, part of that is the support categories,” World Rallycross managing director Paul Bellamy told Motorsport.com

“I’m anticipating that we will have a European round at Silverstone, to add to the World Championship and potentially one other category as well, so there will be a lot of on-track activity.”

The paddock area will be revised to cope with the increased number of competitors. “We know that we’re going to have to increase the paddock size, which we will do,” said Bellamy.

“We may have to create a secondary paddock, but what that will mean is that it will create even more activity over the other side of Stowe Circuit as well as in the F1 paddock.

"The paddock for the World Championship was very, very tight this year so we’ll make that bigger which may mean we’re going to have to relocate stages and food venders and stuff like that, but we’ll make it much more accessible and comfortable for the fans and the teams.”

Meanwhile, the Belgian round of the series at Mettet has been dropped from the calendar, the promotor announced in a statement on Wednesday. The event had featured on the schedule since 2014.

“We would like to thank RUMESM and everyone involved in the World RX event at Mettet,” said Bellamy in a statement. “We have enjoyed five fantastic years together.

Motorsport.com understands that the World RX calendar is set to remain at 12 rounds next season.