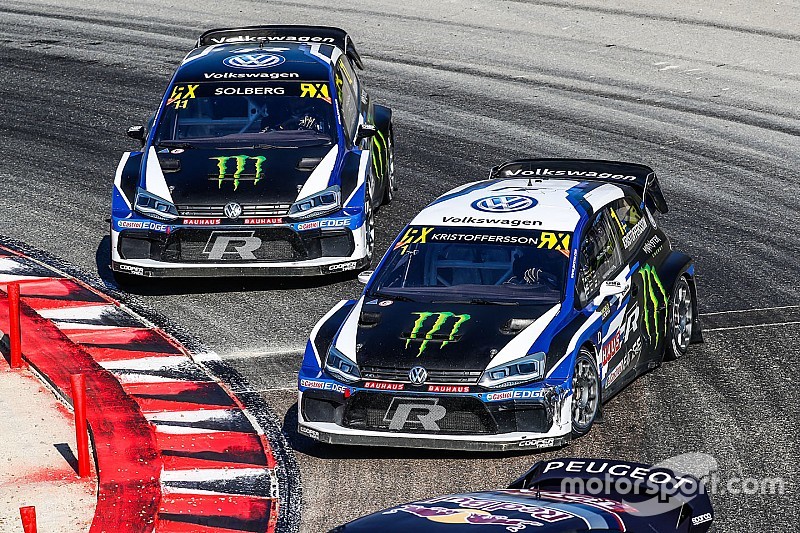 Double World rallycross champions PSRX Volkswagen Sweden are facing a race against time to compete in the final round of the series in South Africa this weekend.

While the other teams are undertaking final preparations in the paddock at the Killarney circuit, the PSRX garage is absent of the squad’s title-winning Volkswagen Polo Supercars and equipment, which are yet to dock in Cape Town’s port.

“For some reason the containers were not put on the ship they should have been on and they were almost 14 days late leaving Europe,” PSRX team principal Pernilla Solberg told Motorsport.com on Friday morning.

“The ship only came to the area here on Wednesday, but since then the winds have been quite strong, so it hasn’t been able to dock to start unloading.”

PSRX is tracking the vessel that is currently in the bay off Cape Town’s coast and is hoping to receive at least the cars overnight in time for Free Practice at 0915 on Saturday morning.

“We know exactly where the ship is, we’ve been tracking it since it left Europe,” said Solberg. “We also know what boat needs to leave the harbour in order for it to get in.

"The harbour and everybody are fully aware of the situation and will do everything they can when it finally docks. We have our fingers crossed and hoping that the cars will be delivered some time during the night so we can compete this weekend.”

The Volkswagen-backed Torsby-based outfit has two containers in the consignment. While the Polos have been located and are expected to be one of the first containers to be unloaded, the second container housing the tools and equipment could take longer to arrive.

“The cars are ready to race and they’ve got the carry over tyres on them that we should bring from a previous event. It will be fairly quick as long as we can get the cars here,” said Solberg.

“Petter [Solberg] and Johan [Kristoffersson] have their gear so they are ready to jump in. We can get fuel and tyres here and we’re trying to plan for all scenarios in case we can’t get the second container.”

The PSRX squad is guaranteed to at least miss its scrutineering slot on Friday, the penalty for which is being allowed only four laps of Free Practice, while the rules state that each driver must complete at least one lap of practice in order to take part in the event.

“First we need allowance to do scrutineering at the later time, then it’s up to the discretion of the stewards to decide if you are allowed you to start or not, if you would not do the practice." said Solberg.

"This is force majeure, so hopefully they would let us start. There are hurdles we need to clear but I haven’t given up yet.”

While triple FIA World Champion Petter Solberg is in a battle for second in the drivers’ standings, teammate Kristoffersson wrapped up the drivers’ title two rounds ago in Austin and the squad secured the defence of its teams’ title in the penultimate round in Germany.

Kristoffersson says he would be more worried if the titles were still up for grabs. “If there was only a few points in it for the championships, then it would be more stressful,” he told Motorsport.com.

“For sure it’s still stressful and we would like to put the cars on the grid, but I think it will be sorted out.”