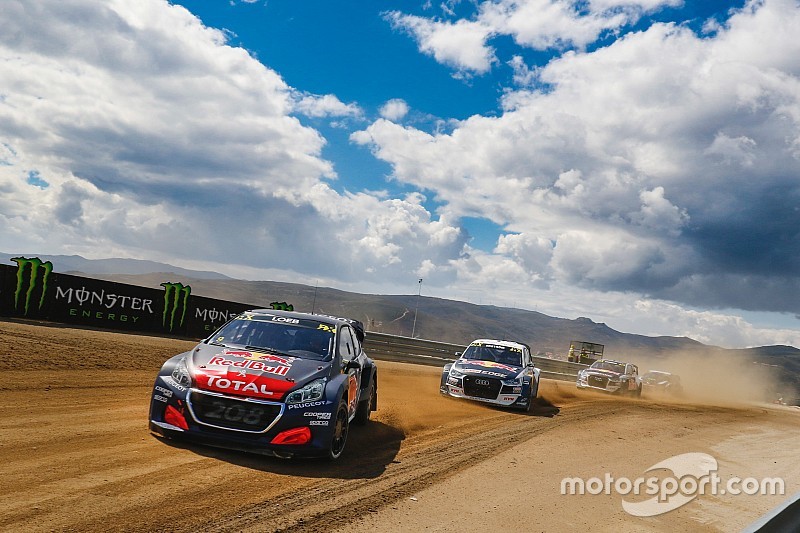 Peugeot drivers Sebastien Loeb and Timmy Hansen shared the spoils on the opening day of Portugal World RX, with the former holding the overall lead.

Loeb stopped the clocks first in Q1, beating the previous best time set by Mattias Ekstrom by two tenths of a second, before Hansen then beat Petter Solberg to race victory with a mixed joker lap strategy in Q2.

As he had in Q1, Loeb won the last race of the Q2 session but the time wasn’t enough to take a day one clean sweep, missing his teammate’s benchmark by 0.034s.

The pair hold the top two positions overnight, with Ekstrom, who beat Hansen in Q1 and was third fastest in Q2, in third.

The Swede took his joker lap at the first opportunity in the final race of Q2, door-handling with Johan Kristoffersson at the joker entry, the latter almost losing track position to Guerlain Chicherit behind.

Kristoffersson had won his Q1 race and been third fastest, passing a fast-starting Jerome Grosset-Janin in the GCK Renault Megane at the first corner.

Finishing a second behind Ekstrom in their Q2 race on track, the championship leader was sixth fastest and fourth at the end of day one, two places up on his PSRX Volkswagen teammate Solberg.

Solberg had won the very first race of the event but with the loose sand-like circuit cleaning with every lap, his overall time was only good enough for 10th fastest.

The Norwegian made the best start from the outside of the grid in his Q2 race but elected to immediately take his joker, the low risk option rather than crossing the track to the inside to make the turn one apex, but soon caught the pack ahead and was unable to make more ground than he did.

Chicherit meanwhile had a strong day in the Prodrive-built Megane RS; fourth in Q1 and 11th in Q2 put the Frenchman eighth overnight, behind round one finalist Niclas Gronholm in seventh.