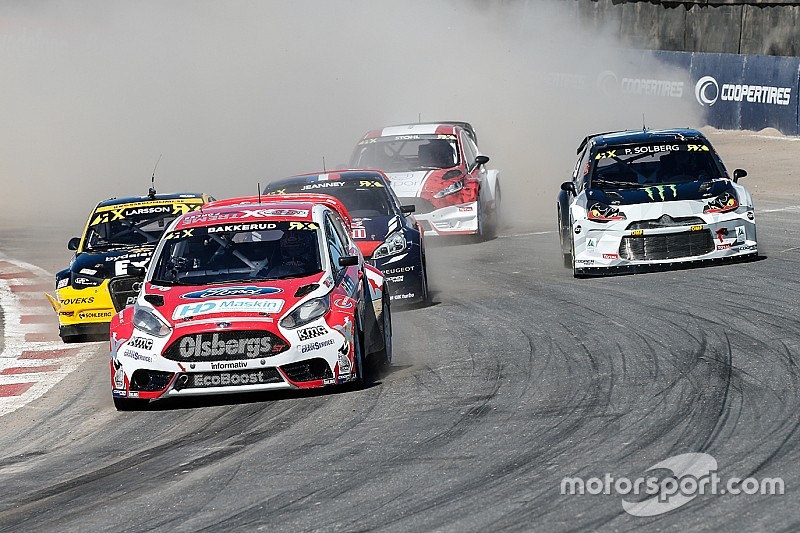 The 2016 FIA World Rallycross Championship presented by Monster Energy will get underway at Montalegre this weekend (15-17 April) for the season-opening Bompiso Rallycross of Portugal. Since becoming a fully-sanctioned FIA World Championship two years ago, World RX has witnessed a surge in popularity and this year has attracted a star-studded line-up of drivers including newcomers Sebastien Loeb and Ken Block.

Bompiso Rallycross of Portugal takes place in the picturesque town of Montalegre and is located in the hills of the Vila region, close to the Spanish border. The circuit presents a unique challenge for both drivers and engineers: at 1800 metres above sea level it is the highest event on the World RX calendar and engines need to be finely tuned to deal with the high altitude.

In the headline World Championship, a total of 23 flame-spitting Supercars equipped with a staggering 600bhp will go head-to-head in Portugal over four qualifying sessions [Q1-Q4], two semi-finals plus one final. The Supercars – which accelerate from 0-60mph in less than two seconds - will be supported by the FIA European Rallycross Super1600 Championship at round one. A record 33 front-wheel-drive S1600 cars – and 14 different nationalities of drivers - make up the entry list.

Paul Bellamy, World RX Managing Director for IMG, commented: “I’m extremely excited about the upcoming World RX season – our driver line-up is the best yet. We have two-time World Champion Petter Solberg defending his crown and facing stiff opposition from several others including last year’s runner-up, Timmy Hansen. Rallycross is well-known for attracting a variety of drivers from different automotive backgrounds and we are honoured to have so many world-class athletes and established rallycross stars competing at Montalegre RX. As well as our 17 permanent World Championship drivers, round-by-round entries will further boost the entry level in World and European Championships, and we have some exciting wildcards entrants to announce in the upcoming months. As for TV, we can offer World RX fans the best package yet: we have full free-to-air live coverage in UK, France, Sweden and Norway to name but a few.”

Fighting to retain his World RX drivers’ title for the third consecutive year is reigning Champion Petter Solberg, who will drive a Citroen DS3 RX Supercar as a single car entrant. Solberg tested at the Estering in Germany recently, before moving to the former European Championship circuit at Lousada (Portugal).

Last year’s teams Marklund Motorsport and Volkswagen Team Sweden have joined forces to form a new-for-2016 team: Volkswagen RX Sweden with Johan Kristoffersson – who finished third overall last year - and Anton Marklund, who has moved from EKS. Over the weekend, the team tested at Lousada in a pair of new Volkswagen Polos.

It’s an all-new line-up for Olsbergs MSE in 2016 with 19-year-old young gun drivers Kevin Eriksson and Niclas Gronholm piloting freshly-built Ford Fiesta ST Supercars. The team have had a pre-season test at Buxtehude and Hockenheim, as well as Strangas which is close to the Olsbergs MSE workshop in Sweden.

The biggest change for EKS in 2016 is Finland’s Topi Heikkinen signing for the squad, joining team owner and driver Mattias Ekstrom in the Audi S1 EKS RX quattro. Both drivers had valuable seat-time testing at Hockenheim and the Estering in the run-up to Montalegre.

It’s all change for ALL-INKL.COM Muennich Motorsport in 2016 as the team announced Latvia’s Reinis Nitiss would join team owner, Rene Muennich. The team also have a pair of brand new Seat Ibiza Supercars.

Britain’s Liam Doran has moved to British team JRM Racing to race a Mini RX as an individual entry. Argentina RX winner Robin Larsson will return for another full season in his privately run Audi A1.

A number of changes have been implemented ahead of the new World RX season, with the main ones listed below.

The four timed qualifying rounds, previously known as heats, that determine each driver’s position at the Intermediate Classification will now be called Qualifying, to fall in line with other FIA World Championships. The four rounds will be called Q1, Q2, Q3 and Q4 for 2016.

As it has for the last two seasons, the FIA European Rallycross Championship for Supercar will run at five of the European-based World RX events. However in 2016, World RX and Euro RX competitors will race separately in the qualifying stages, adding to the existing split in the semi-finals and finals. This change means that drivers will compete directly against their closest rivals in the same Championship. Euro RX will join World RX at events in Belgium, Norway, Sweden, Barcelona and the new event in Latvia.

Cars competing in the FIA World Rallycross Championship will have to run an ECU and software homologated by the FIA for the first time in 2016. A number of manufacturers have homologated ECUs and software with the FIA, again falling in line with other FIA World Championships. The move allows the governing body to ensure that teams are using only homologated equipment, ruling out the potential for torque control or traction control to be used.

To improve continuity in the starting method across events and help reduce the chance of false starts, the starting system will be the same at all events and the 'Ready to Race’ board has been replaced by an illuminated ‘Ready to Race’ sign that is incorporated with the start lights. The race starter will no longer determine when the green light is switched on, instead they will simply start an automated system that will display the ‘Ready to Race’ sign for four seconds before a 1.5 second period with no lights and then a random period between zero and two seconds before the green starting light appears.