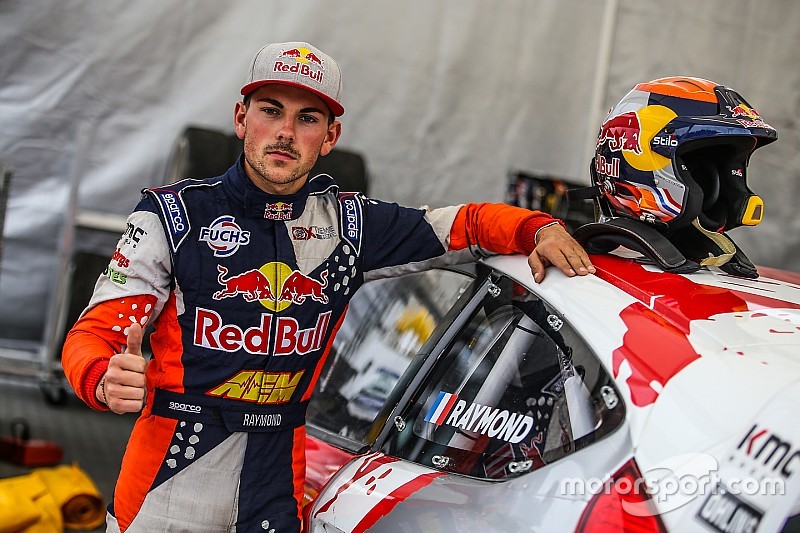 As prize for winning the RX Lites Cup support category this season, French driver Cyril Raymond will make his World Rallycross debut at the penultimate round of the series in Germany this weekend, driving an OlsbergsMSE Ford Fiesta Supercar.

The 23-year old RX Lites Champion tested the OMSE Fiesta for the first time in Latvia last week, following the first World RX event to be held in the country, and will compete this weekend against the two previous winners of the support category, Kevin Eriksson and Kevin Hansen.

“My experience at the test was really good and the team were very happy with me,” Raymond told Motorsport.com.

“The power in these cars is very high and my feeling on the track was really good. I did four launches [starts] which were really amazing and we did around 25 laps.”

Both previous winners of the prize drive made their World RX Supercar debuts at the season finale in Argentina, with Eriksson finishing on the podium in his maiden appearance and Hansen also making the final.

Raymond will face 29 other drivers this weekend at the traditional Estering circuit in Germany, the last European date on the calender, but is confident that he can fight for a place in the semi-finals.

"I will inevitably be compared to the level that has been set by Kevin Eriksson and Kevin Hansen, but do not forget that the level of the championship is increasing all the time.

"The level is very high, so that will not be easy. It will be a great experience for me to race in Germany and I think that it’s possible to make the semi-finals.”

Raymond has prior Supercar experience, he won on his debut in the category in the French Rallycross Championship last season, and repeated the performance later in the year in a second one-off appearance driving a Pailler Competition Peugeot 208.

“It’s not a problem for me because [to get into a Supercar] because I have experience already, but not in exactly the same car,” he said.

Having switched from French F4 and the single-seater VdeV series to rallycross, Raymond could become one of the first career rallycross drivers if he can follow in Eriksson and Hansen’s footsteps in racing a Supercar full-time next season.

Following his move from circuit racing, the Frenchman won the Twingo R1 Cup in France in his maiden season [in 2013] and used his prize drive in a Super1600 Renault Twingo to win the front-wheel drive category in the French Championship the following year, before selected Supercar and RX Lites outings last season.

Raymond will join permanent OMSE drivers Eriksson and Niclas Gronholm in the squad this weekend.

Loeb set to remain in World Rallycross in 2017