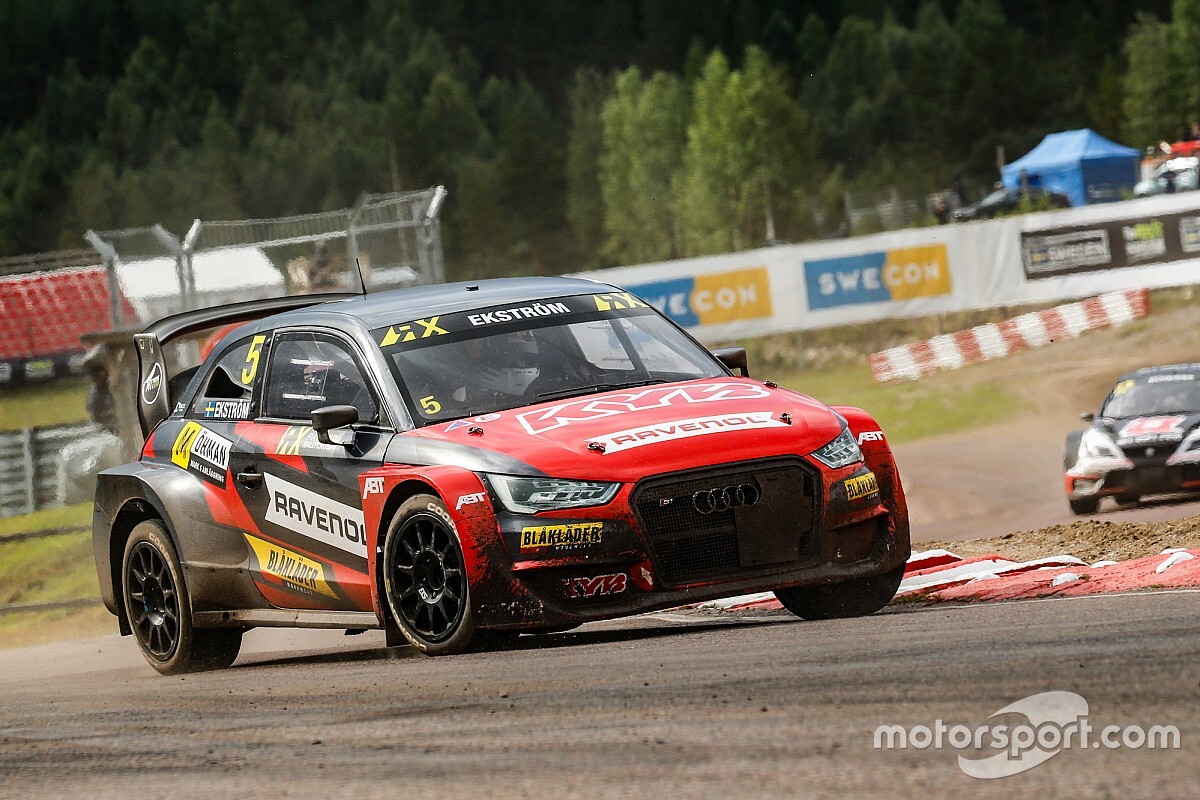 Less than a week after announcing his shock return to the World Rallycross Championship, former champion Mattias Ekstrom beat round one winner Johan Kristofferson in a enthralling fight to claim victory on the second day at Holjes.

The Swedish pair traded fastest times through the qualifying sessions, Ekstrom’s job made harder when he was beaten to semi-final two victory by KYB Team JC teammate Robin Larsson.

Reigning European champion Larsson then challenged pole starter Kristoffersson for the race lead at turn one of the final, but was forced wide on the exit of the corner and did a brilliant job to remain in control of his Audi S1.

Behind, Ekstrom dived straight into the compulsory joker lap on the outside of turn two, chased by Kevin Hansen.

Larsson hassled the rear of Kristoffersson’s Volkswagen Polo on lap one, as Ekstrom caught Andreas Bakkerud, passing the Norwegian at the first turn of the second tour, Bakkerud’s GCK Renault Megane slowed by a problem.

Larsson immediately responded to Ekstrom’s lap one joker at the first opportunity, followed into the compulsory extra route by Timo Scheider. Larsson returned to the standard lap behind Ekstrom, the double DTM champion in free air to chase Kristoffersson up front.

In an epic battle of exchanging lap times by two of the most successful drivers in the series’ history, Ekstrom initially closed the gap to the championship leader, but Kristoffersson took half a second back on lap four with the fastest lap of the entire double-header weekend.

Ekstrom however had pace in hand, bettering Kristoffersson’s effort by three tenths on lap five, and moved into the lead when Kristoffersson took his lap six joker. Despite a challenge from Kristoffersson in the final corner of the race, Ekstrom claimed his third World RX win at the Holjes circuit.

Kristoffersson finished second on track, but was handed a five second penalty for his big push through the joker section, in which he had hit two track markers.

That elevated Kevin Hansen, who had overtaken an ailing Larsson during the latter stages of the race, into second. Kristoffersson would also have lost out on third, but for a five second penalty for Scheider, meaning the former DTM champion remained fourth. Larsson held on to finish fifth, with Bakkerud over 20 seconds behind in sixth.

Bakkerud made it into the final following an incredible drive through the final lap and a half of their semi-final, after receiving contact from reigning World RX Champion Timmy Hansen in the velodrome section.

While the left-rear wheel of Bakkerud’s Megane did its best to part company with the car, Hansen traded places with Anton Marklund and Timur Timerzyanov behind, holding the trio up, and Bakkerud made it to the finish in third. Hansen was later disqualified from the race for the initial move on Bakkerud.

In the first event for the new Projekt E all-electric support category, Ken Block won the final in a Ford Fiesta. He beat Natalie Barratt and Hermann Naubauer, driving similar cars. Citroen WRC driver Mads Ostberg was forced to miss the event and the debut of the electric Citroen C3 due to coronavirus-related travel restrictions.