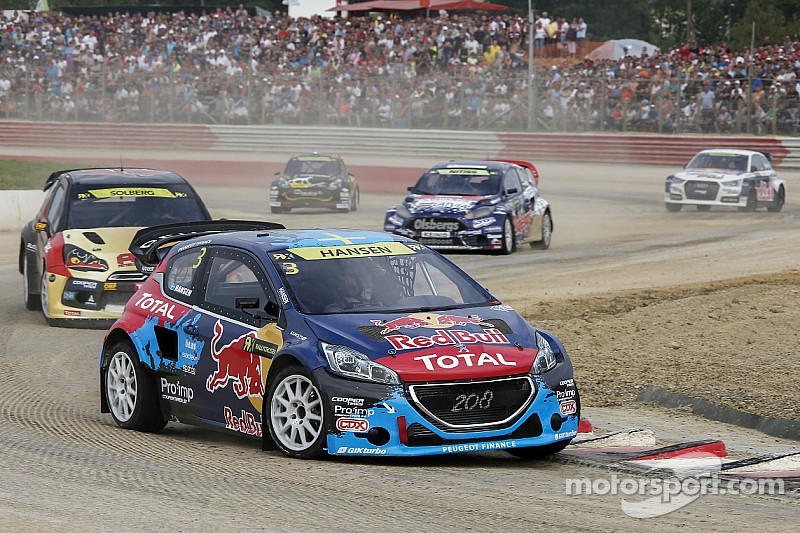 Solberg’s podium position at the Franciacorta International Circuit has seen the PSRX driver stretch his lead at the top of the standings to 60 points with two events still remaining. Topi Heikkinen is currently second behind Solberg in the overall standings but with Solberg having already won four events this season to Heikkinen’s one, Solberg automatically becomes World Champion based on his higher percentage of event victories.

This has been a brilliant weekend and it is the best feeling to win when I pushed so hard for this moment,

“This hasn’t sunk in yet, it is a dream come true,” grinned Solberg who is now a World Champion in both World RX and WRC. “When I stopped rallying, I didn’t know what to do and then IMG took on rallycross and brought it to an amazing level so now it seemed like the right choice. I broke the right-rear suspension in the final and my spotter was shouting on the radio that I needed to calm down because all I needed to do was get to the podium and I would win the Championship.

I just wish my family were here today with me – my wife Pernilla and my son Oliver are back home because Oliver won the Norwegian Crosskart Championship yesterday. I have to thank them and my whole team who have worked so hard to make this happen, they really do an incredible job and have worked day and night for a lot of the season. I can’t wait to celebrate this moment with everyone tonight.”

Arguably the most impressive drive of the weekend, however, was that of 21-year-old Hansen who looked virtually untouchable in his Team Peugeot-Hansen prepared 208 Supercar. Hansen, the son of multiple European Rallycross Champion Kenneth, won the Monster Energy Super Charge Award, two heats, his semi-final and the all-important final to take his first ever World RX victory.

This has been my first ever Supercar event and I would have been happy to have made the semi-finals, never mind second overall.

“This has been a brilliant weekend and it is the best feeling to win when I pushed so hard for this moment,” explained Hansen who was joined by team-mate Timur Timerzyanov on the front row of today’s six-car final. “During the final, I was pushing really hard but after a few laps in, I saw pieces from the other cars all over the track so I knew there had been a lot going on behind me. Both Petter and Richard were giving me a lot of pressure but thankfully I was able to hold on and I’m so happy to finally take a win for my team.”

Joining Hansen and Solberg in the top three was multiple Swedish Touring Car Champion Richard Goransson who shone on his Supercar debut with Ford Olsbergs MSE. Goransson, who stepped up from RX Lites to Supercar this weekend, battled against a hugely competitive field of 40 Supercars to make it through to the final where he finished second to Hansen. “I am speechless, it has been an absolutely crazy weekend,” explained Goransson. “This has been my first ever Supercar event and I would have been happy to have made the semi-finals, never mind second overall. I kept out of trouble in the final and that’s what led to this result.”

Alongside Goransson in the final driving a second Fiesta was regular Ford Olsbergs MSE driver Andreas Bakkerud who retired on lap two after a string of misfortunate events over the weekend. He finishes the event sixth overall. Bakkerud’s team-mate Reinis Nitiss was still in the title fight with Solberg but the 18-year-old’s chances of the World RX title was shattered when Nitiss was knocked out of the semis. Sweden’s Johan Kristofferson led the Intermediate Classification stage yesterday and another strong performance today saw the VW Polo driver finish fifth in World RX and second in European.

“It feels great to be European champion. We’ve been struggling all weekend with engine problems so we didn’t have the power we wanted. We have just been safe in all four heats and managed to finish them,” said Larsson, who follows in his father Lars’ footsteps by winning the title.

Russian driver Sergej Zagumennov claimed the European Super1600 crown at the Intermediate Classification, while Russia’s Nikita Misyulya went on to win the event. Misyulya finishes the year 18 points behind Super1600 champion Zagumennov who amassed a total of three event wins over the course of the season. Janis Baumanis was awarded third.

Even though Solberg has taken the majority of the limelight today after winning the title, Timmy Hansen’s light-to-flag victory today must not go under the radar. I have witnessed the huge effort that the entire Team Peugeot-Hansen has put into this year and I’m pleased that the team have finally got the win that they truly deserve. As well as the World RX title, we have also seen Championships won in Euro RX, Super1600, TouringCar and the supporting RX Lites Cup which was won by Kevin Eriksson today with one round still to go.

It’s also incredible to have newcomers such as Richard Goransson and Gigi Galli reach the semis in what has been a hugely competitive field of entries. Even though the drivers’ title has now been decided, the Teams’ Championship is more exciting than ever before with VW Marklund and Ford Olsbergs MSE both tied with 313 points at the top of the standings.”

The penultimate round of the FIA World Rallycross Championship will take place at the former F1 venue of Intercity Istanbul Park (Turkey) in just under two weeks time (11-12 October).

Driver points after Round 10, World RX of Italy

Team points after Round 10, World RX of It

Why Ken Block matters. A lot.