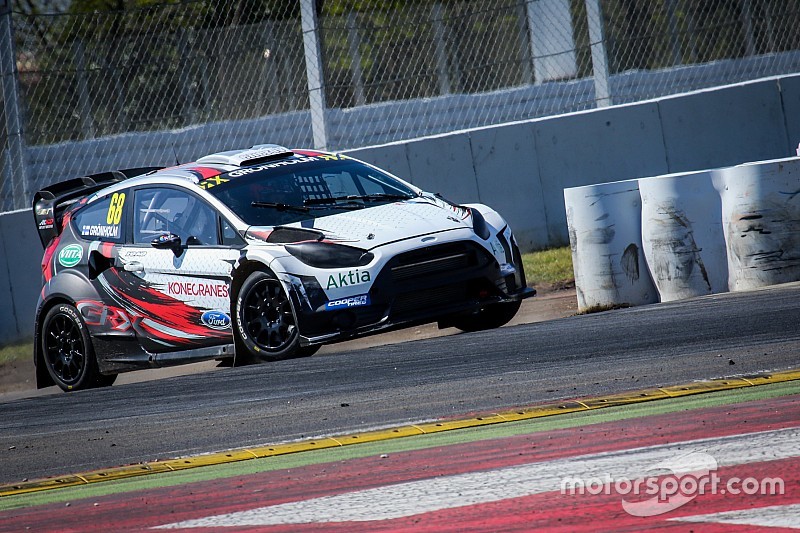 Gronholm Sr. tested the GRX team’s M-Sport-built Ford Fiesta Supercar in Spain following a difficult opening weekend of the season for the squad in Barcelona.

Niclas Gronholm was forced to rush back to Finland after the event to continue national service duties, meaning his World Championship-winning father was able to return to the driving seat.

“We were struggling a lot in Barcelona because the car came together at the last minute – even the night before the race we had to change the gearbox and it had a different ratio in,” Marcus Gronholm told Motorsport.com.

“We had a few other small problems and it was a shit weekend really, but we know what we have to do.”

“We found better engine mapping, gear cutting and things like that,” he continued. “Then the engine went back to Pipo to go on the dyno, so it should be much better at the next race.

"Engine-wise, there is not much difference [to the OMSE-built Fiesta that he raced previously and Niclas Gronholm campaigned in World RX 2016] but the chassis is more like a rally car, with different suspension. It feels quite nice.

"When we get all the other things sorted I am sure Niclas will be happy and can do good results. When I was testing, we could see that there is potential in the car because there were other cars on the track to compare times, and we are okay.”

Now focused on his GRX squad - which runs the Fiesta together with the Set Promotion team - the 2000 and 2002 World Rally Champion, who spent considerable time testing the stillborn 2017 Polo WRC car with Volkswagen Motorsport last year, says he enjoyed testing the Fiesta Supercar but doesn’t currently harbour ambition to return to competition himself.

“It was fun for me to test,” said the 49-year old. “I was quite excited again when I was driving and [Sebastien] Loeb driving there. It was nice to attack; I was even sweating after a few laps.

"But honestly, it’s fine for me to just do this job and help Niclas, I don’t feel that I need to compete anymore.”

The Finn also confirmed that Niclas has matched his own lap times in testing, and thinks with more experience he will be even faster on race weekends.

“Me and Niclas have been driving together on the same tracks and he can do my times, there is no problem there.

"Sometimes in the races he is a bit nervous, and when it’s wet in the morning and getting drier you have to start to attack and step up your speed, but he is not so experienced and will learn about that.”