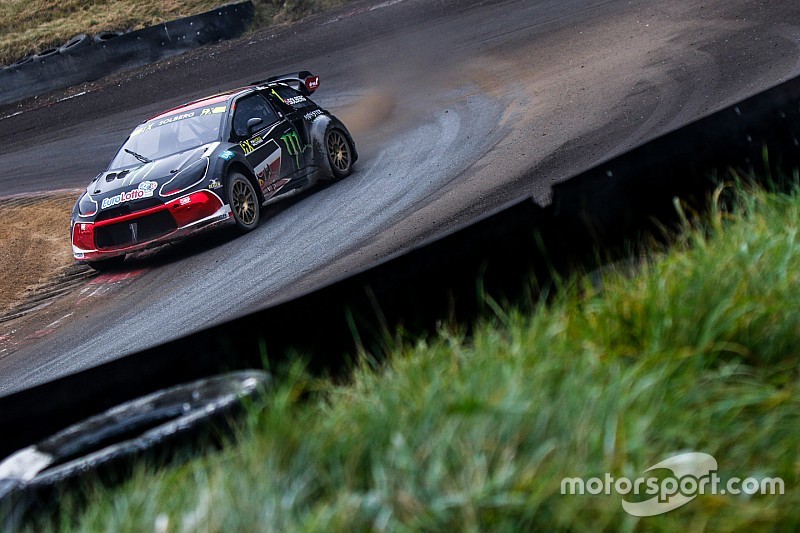 Having finished only seventh at the end of day one at Estering, Petter Solberg put a pair of fastest times in Q3 and Q4 on Sunday morning, lifting the double World RX Champion to top spot in the Intermediate Classification.

The Norwegian displaced championship leader Mattias Ekstrom from the spot, who had topped the order on day one, in the series’ penultimate round.

With the title in his mind, Ekstrom drove a clever brace of races on Sunday morning, staying out of danger in the notoriously difficult Estering first corner but still fighting hard for position.

Fourth fastest in both Q3 and Q4 was enough to be second at the Intermediate stage, claiming 15 championship points.

With his closest title rival Johan Kristoffersson sixth ahead of the semi-finals, Ekstrom is currently ahead by over 30 points, the margin he needs to win the title today, but with championship points available in both the semi-final and final, the title is not a full gone conclusion.

The 18-year old made the best start in mixed conditions in his Q3 race using a mix of wet and dry tyres on his Peugeot 208 and was third fastest behind Solberg and his Peugeot-Hansen stable mate Sebastien Loeb.

He was second to Solberg in the last race of Q4 which was enough for Hansen to join Solberg on the front row of semi-final one.

Despite only being 11th fastest in Q4, one spot behind his Hoonigan Racing Division teammate Ken Block, Andreas Bakkerud produced one of the drives of the season to win his race.

Side-by-side contact with Janis Baumanis after turn one broke a right rear suspension component, causing his Ford Focus RS RX to squirm all over the circuit into the second corner.

Amazingly, Bakkerud held onto his lead while behind Baumanis, Timmy Hansen, Tanner Foust and Davy Jeanney all took their joker laps in an attempt to leap frog the Norwegian.

But even with hitting the wall on both sides of the circuit at its highest point on the final lap, he exited the last corner joker just ahead of Hansen to win the race.

Baumanis continued his day one pace into day two and wound up fourth at the Intermediate Classification.

He’ll start semi-final two on the front row alongside Ekstrom. Loeb ended up fifth overall after the qualifying races.

American Foust had a far better Sunday than Saturday, but ninth and then 19th in Q3 and Q4 wasn’t enough to lift him into the semi-finals.

Kevin Eriksson will be the sole  OlsbergsMSE Ford Fiesta in the semi-finals by qualifying eighth overall but privateer Robin Larsson is the first driver to miss out on progressing in the event, after qualifying 13th. He will line up as first reserve for the semi-finals.