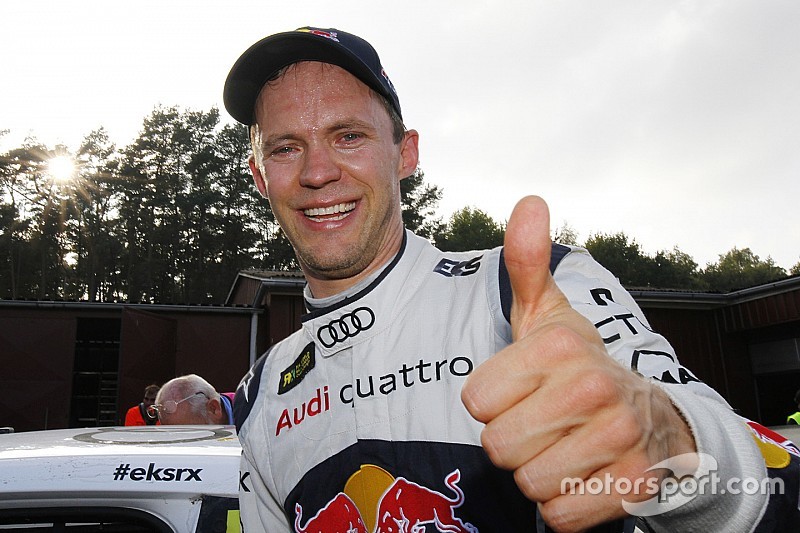 Mattias Ekstrom has been crowned as FIA World Rallycross Champion at the penultimate round of the series in Germany, by finishing fifth in the final while Kevin Eriksson claimed a maiden series victory.

Both Ekstrom and outgoing champion Petter Solberg won the two semi-finals to start on the front row of the final, and the title-rivals raced neck and neck to the first corner of the Estering circuit.

But, in an amazing display of determination and car control, Eriksson threw his Ford Fiesta sideways heading into the outside of the first corner and took the lead from Solberg as the pack exited turn one.

While Eriksson was the big winner in the first corner action, the big loser was champion-elect Ekstrom who ended up sixth and last in the run to turn two.

At that stage of the race, with Solberg in second, the title fight would have been taken to the season finale in Argentina.

But Johan Kristoffersson, who entered the event second in the points and ran fourth on lap one of the final, picked up a left-rear puncture on his Volkswagen Polo and dropped to the rear of the field. He immediately took his joker lap, on the third tour.

Solberg was next to take his compulsory extra-route on lap four, returning to the pack behind Bakkerud, who then took his joker on the fifth lap, allowing Solberg to climb back to second.

European Champion Hansen pushed Bakkerud hard at the start of the sixth and final lap for the last podium position,  but the Norwegian held on.

Eriksson took his joker on the final tour and despite getting very sideways as he applied the throttle in the run to the line, just edged Solberg to score his first ever World RX victory in his first final appearance of the season.

Fifth place for Ekstrom sealed the Swedish star the crown, even if he fails to score any points in Argentina next month.