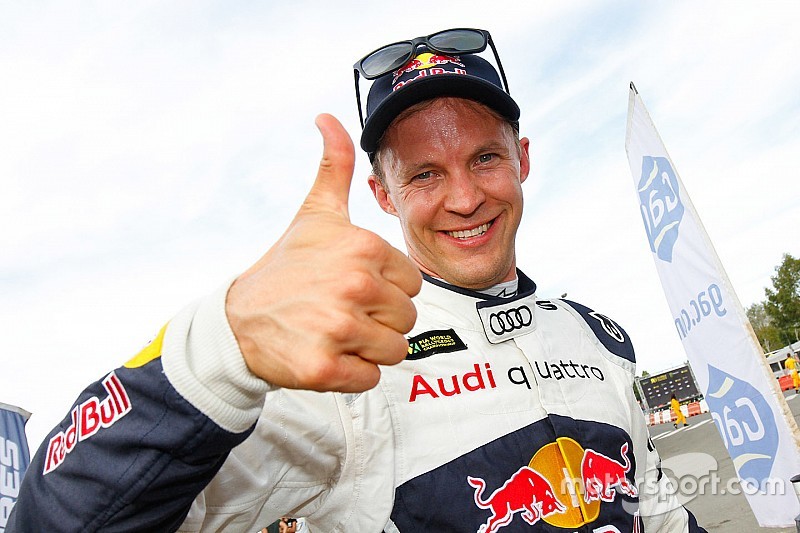 For the first time since the Belgian round of World Rallycross in May, title protagonist Mattias Ekstrom qualified top at the Intermediate Classification at Loheac, and in the process has drawn level with reining champion Petter Solberg in the standings.

In a rain-hit second day at Loheac, Ekstrom was second fastest in Q3 and third fastest in Q4 to maintain his overnight position at the top of the order and claim 16 championship points, while compatriot Johan Kristoffersson set a pair of second fastest times to climb to second at the Intermediate stage.

After being embroiled in a race-long battle in Q3, returning 11th fastest time, Solberg then jumped the start of his Q4 race and had to take two joker laps as penalty.

When under pressure, Solberg is at his best, the Norwegian taking the lead at the start of the race when it did get underway

Having taking his jokers on lap three and four, not only did he win on track ahead of home driver Davy Jeanney, but also set the second fastest time of the session.

Kristoffersson, running in the last race of Q4, was aided by a drying track to better Solberg’s time by almost two seconds.

Double 2016 winner Andreas Bakkerud fought with Hoonigan Racing Division teammate Ken Block in Q4 and ended up one place ahead of Block in the overall standings, in third.

Block, having his best weekend of the year to date in the new-for-2016 Ford Focus RS RX is fourth, ahead of Solberg and home hero Sebastien Loeb.

Nine-time World Rally Champion Loeb is renowned for being a master of difficult conditions, but made two mistakes in Q3 when the track was at its most slippery and dropped from third overnight to sixth, one place up on teammate Timmy Hansen, who suffered power steering failure in Q3 and was involved in a close fight with Scottish driver Andy Scott in Q4.

Jeanney and Kevin Hansen, driving for the Peugeot Hansen Academy squad made it four cars for Kenneth Hansen’s teams to qualify for the semi-finals in eighth and 10th, European Championship leader Hansen winning his Q4 race ahead of Robin Larsson.

In his final event for the All-Inkl.com Munnich Motorsport team, Reinis Nitiss qualified for the semi-finals in 11th with British driver and Loheac specialist Andy Scott making it into the to 12 in his first World RX start since the British round in May 2015.