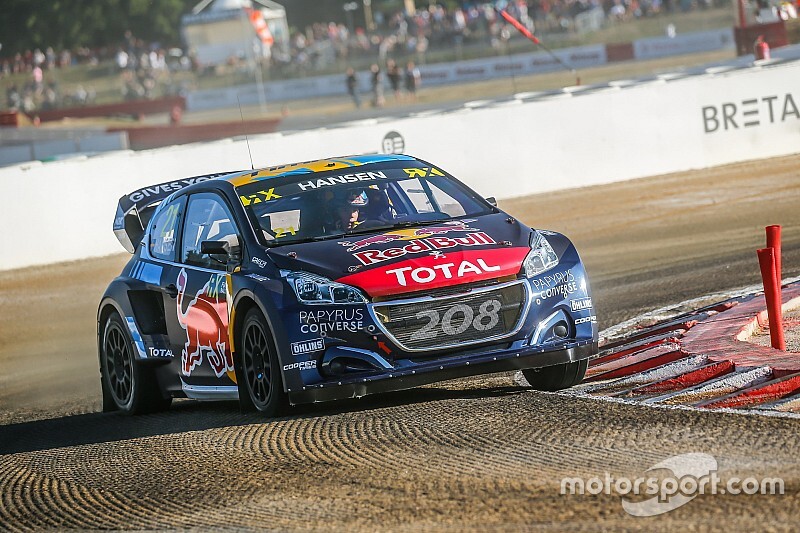 Swede Timmy Hansen claimed victory at the French round of the World Rallycross Championship with an emphatic drive.

Hansen topped qualifying at Loheac with a dominant performance in Q4, fighting back from a difficult opening day, but was beaten away from the line in the first semi-final by title-rival Andreas Bakkerud, who won the encounter to secure pole position for the final.

By qualifying third in the Intermediate Classification, Bakkerud had moved into the championship lead, two points ahead of Kevin Hansen, but in the run to turn one in the final, the Norwegian ran deep to defend his position from a fast-starting Niclas Gronholm and both ran wide.

That allowed Timmy Hansen, from the inside of row two to move into the lead, from where he never looked back, took his joker on the fifth tour and claimed his second Loheac win.

Lithuanian GC Kompetition driver Rokas Baciuska had topped the order on day one, then set second best time to Hansen in Q4 on Sunday to take second overall in qualifying.

He started on the second row of the final, but was passed in the second corner by teammate Anton Marklund, while Kevin Hansen, who had qualified 10th and battled his way through the semi-finals to beat former DTM champion Timo Scheider into a final spot, moved to fourth, overtaking Bakkerud and Gronholm.

Baciuska took a lap one joker, followed by Bakkerud, then pressured the rear of Kevin Hansen’s Peugeot. From second, fellow Renault Megane driver Marklund took the joker on lap four, returning to the main track just between Hansen and Baciuska.

While the elder Hansen brother was untroubled up front, Kevin left his joker until the final tour, threw the 208 sideways through the compulsory extra route’s chicane and returned to the main circuit with the rear still sliding.

But he just collected things up in front of Baciuska into the next left hander, to claim the final podium spot as Marklund took second, his best finish of the season.

For the second event in a row the GCK squad delivered a best-ever performance, at the Guerlain Chicherit owned-team’s home event, with reigning European Super1600 champion Baciuska backing up Marklund podium with fourth, ahead of Bakkerud and Gronholm in fifth and sixth.

Bakkerud’s strong performance through the weekend means he will enter the final two rounds of the year in Latvia and South Africa with a two-point advantage over the Hansen brothers, who are tied in second.