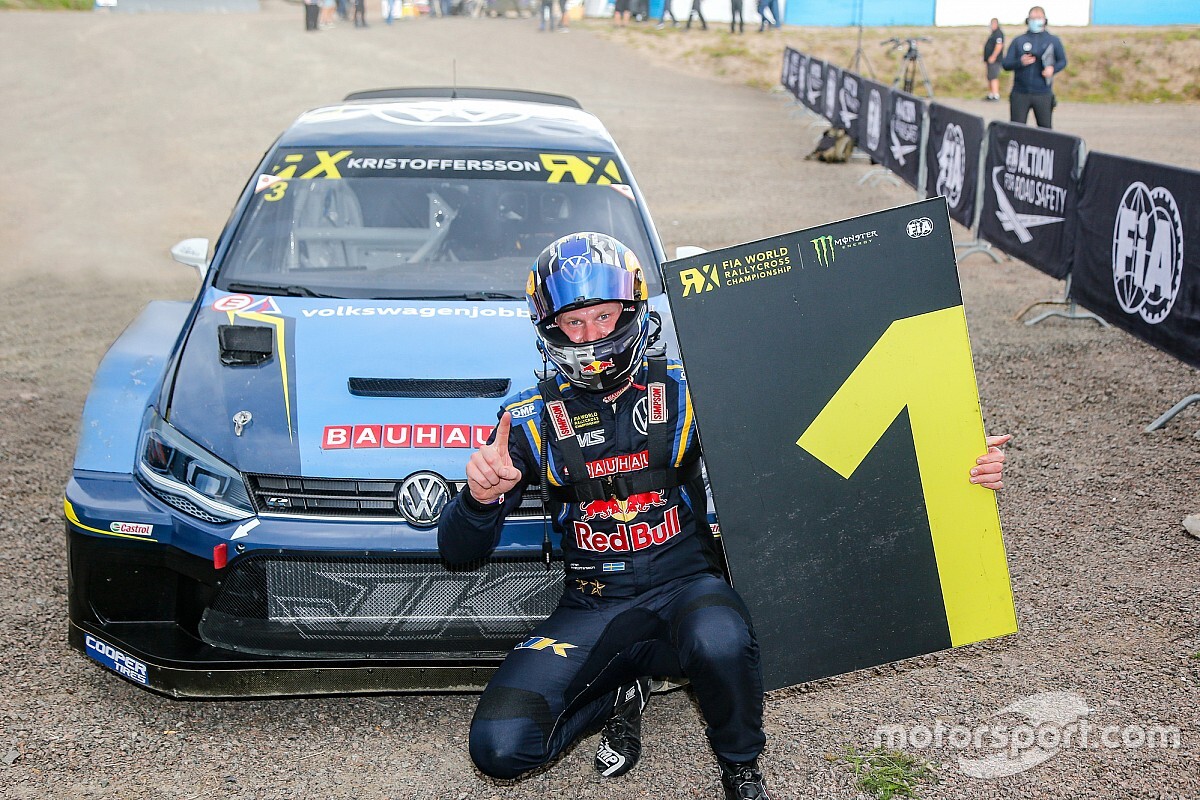 World Rallycross returnee Johan Kristoffersson netted his second series victory in a week, winning the third round at Kouvola in Finland ahead of local star Juha Rytkonen.

Kristoffersson dominated proceedings on his first ever visit to the Finnish venue, the double-header introduced into the schedule at late notice to embellish the number of rounds in the coronavirus-hit World RX roster.

Fastest through qualifying, Kristoffersson won both the first semi-final and the final from the front with relative ease in the Kristoffersson Motorsport-run, works-built Volkswagen Polo and extended his margin to 16 points at the head of the drivers’ standings, helped in part by closest points challenger Mattias Ekstrom retiring from the semi-finals.

Former champion Ekstrom had started from pole position in the second semi-final, but dropped to second at the opening corner behind Rytkonen, then was slowed with a problem at the second turn of the second tour.

Ekstrom’s team KYB Team JC team mate Robin Larsson had also dropped back in the opening corners, and despite fighting hard to make up for lost ground, suffered a puncture in the closing stages while Rytkonen won the race to join Kristoffersson on the front row for the main event.

In the final while Kristoffersson made the best launch from pole, as Timmy Hansen closed the door on Niclas Gronholm at the first corner, the latter taking his joker at the first opportunity towards the end of the undulating Kouvola lap.

Double DTM champion Timo Scheider made his third final in a row and pressured Kevin Hansen in the early stages, but it was the other Hansen, reigning champion Timmy, who ran third, then climbed to second when Rytkonen took his joker on lap three.

Guided by former World RX event-winner Toomas Heikkinen on the radio, the decision to send reigning Finnish Rallycross Champion Rytkonen into the extra-route joker on the third tour was the correct call; he covered off GRX regular and teammate Gronholm, who had just passed Kevin Hansen, for track position.

The places remained the same until the final tour, and while Gronholm had initially nibbled away at the gap to Timmy Hansen, when the Peugeot 208 driver followed Kristofferson through the joker in the final corners, he came out just ahead of Gronholm, covering the inside into the final corner to secure his first podium of the campaign.

The biggest adulation was reserved for Rytkonen however, finishing second between the series’ two most recent champions on his debut, on the back of just a single day’s testing in the GRX Hyundai i20.

The fourth round takes place on the same circuit on Sunday.

Hungaroring in frame for World Rallycross round