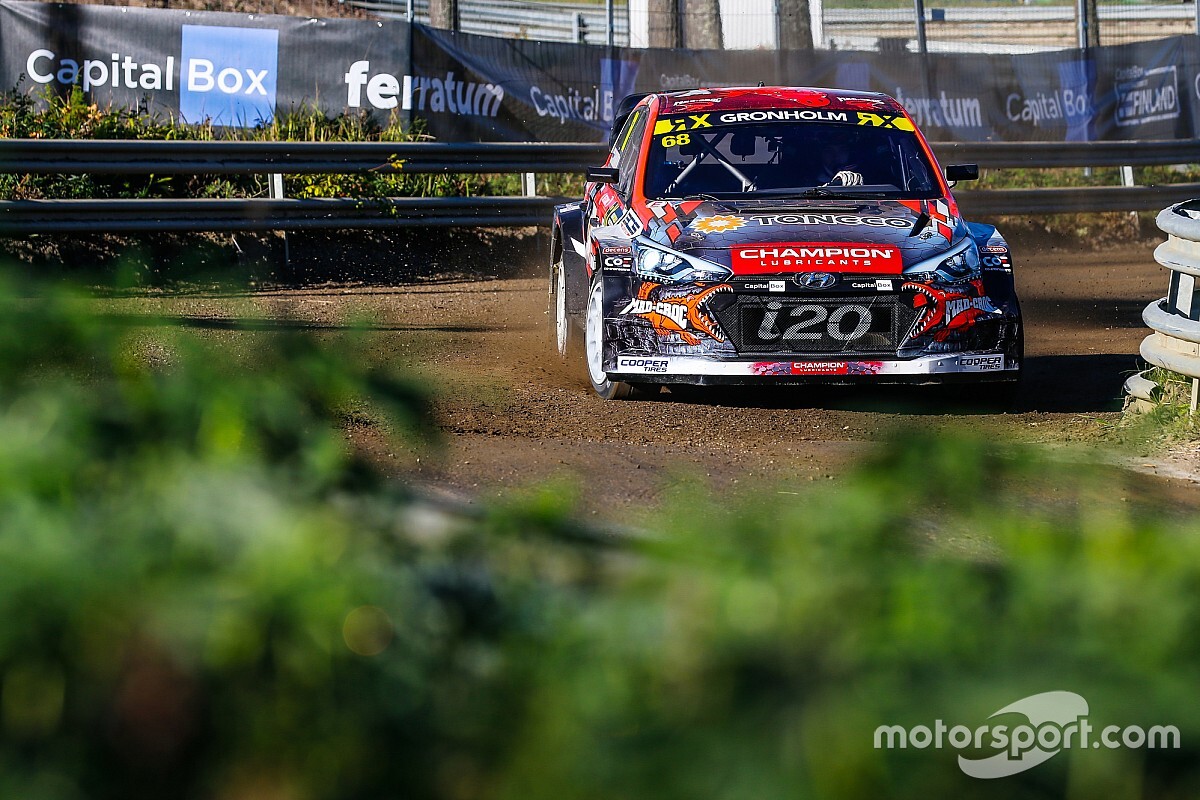 Finnish driver Niclas Gronholm withstood enormous pressure in wet conditions to win the fourth round of the World Rallycross Championship at Kouvola, his home circuit.

Gronholm became only the third driver to set a fastest qualifying time of the 2020 season by stopping the clocks first in Q2 on Sunday morning, but had to endure the worst of the track conditions in Q3 and was unable to stop points’ leader Johan Kristoffersson heading the qualifying order. Gronholm wound up second overall.

Kristofferson and Gronholm then won their respective semi-finals from pole, to lock out the front row of the final, as rain during the knock-out races had made the entire circuit muddy and slippery.

Double World RX champion Kristoffersson then made the best launch to win the race to the first corner aboard his Volkswagen Polo, but made an uncharacteristic mistake and ran wide after the apex, Gronholm seizing the opportunity and moving through on the inside in the run towards the uphill turn two right-hander.

With Kristoffersson sandwiched between Gronholm and row-two starter Mattias Ekstrom, the leading three cars were attached bumper-to-bumper into the downhill hairpin on each lap, Gronholm stopping his car and hugging the inside barrier to defend his line, withstanding both physical pressure to the Hyundai’s rear bumper and mental pressure of three World RX titles forcing him into the turn.

Kristoffersson broke out of the pack on the third tour, taking his compulsory extra-route joker lap, and dropped to third, ahead of Gronholm’s GRX teammate Timur Timerzyanov, who had taken his joker on lap two.

Ekstrom then took up the fight to hassle the far less experienced Gronholm, Kristoffersson meanwhile closed on the leading duo. Such was Gronholm’s defensive driving that the top four cars ran bumper-to-bumper on the fourth lap, before Timerzyanov dropped off the leading trio.

Gronholm, the only driver without a mud-covered car, took his joker on the final tour, followed by Ekstrom. But, while in consistent conditions Kristoffersson may have been enough to take advantage, a perfectly executed joker on the cleaner section of track meant Gronholm returned to the standard lap just in front of Kristoffersson to maintain the lead into the final corner and claim victory.

Timmy Hansen finished fifth and Andreas Bakkerud was sixth, the latter making it into the final when the star of round three on Saturday, Juha Rytkonen, was penalised for a track limits infringement in the semi-finals, dropping him behind the Norwegian.