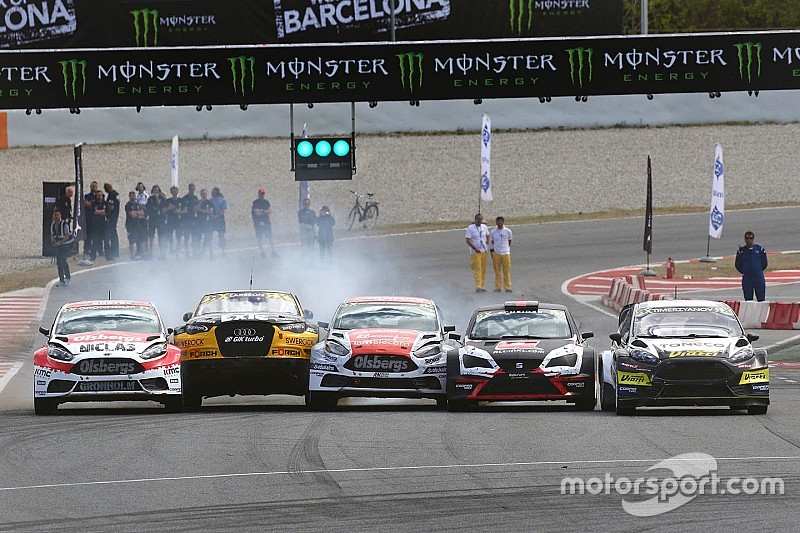 The FIA has released the list of permanent entrants that will compete full-time in the FIA World Rallycross Championship this season, which begins at Barcelona’s Formula 1 venue in Spain later this month.

Led by reigning world champion Mattias Ekstrom, a total of 18 drivers are set to take part in the championship full-time, with six two-car teams and an additional six individual drivers signed up for the 12-round series, one up on 2016’s list of permanent entries.

The drivers’ and teams’ championship winning squad will continue with its 2016 line-up of double DTM champion Ekstrom and Finnish driver Toomas Heikkinen, while Reinis Nitiss will join the outfit in a third Audi S1 as an individual entry.

Team Peugeot-Hansen will also field three cars, with Sebastien Loeb and Timmy Hansen being retained and 2016 European champion Kevin Hansen joining the main squad as an individual entry, graduating from the Hansen Talent Development team from 2015.

Loeb and Timmy will drive 2017-spec Peugeot Sport-built Peugeot 208s, while Kevin will compete in a 2016 version of the car.

Arguably the highest profile move of the off-season was that double-champion Petter Solberg will switch from being an individual, independent entrant for 2017, his PSRX team securing manufacturer backing from Volkswagen to run a pair of new Polo Supercars in 2017.

He will be joined in the PSRX Volkswagen Sweden squad by 2016 World RX runner-up, Johan Kristoffersson.

Ford-backed Hoonigan Racing Division is unchanged in its line-up, and will field a pair of Ford Focus RS RX Supercars for Ken Block and Andreas Bakkerud, while one of Block’s former Ford Fiesta RX Supercars has been bought by former double World Rally Champion Marcus Gronholm for his son Niclas to race under the GRX banner as an individual entrant in 2017.

The team for which Gronholm drove in 2016, OlsbergsMSE, won’t continue a full-time programme in World RX in 2017, the squad’s other driver from last year, Kevin Eriksson has moved to the MJP Racing Team Austria squad (formerly known as World RX Team Austria) to partner Timo Schieder in a pair of Ford Fiesta Supercars this season.

Scheider will miss the British round of the series at Lydden Hill due to clashing commitments, where 2013 BTCC Champion Andrew Jordan will deputise.

The team’s 2016 drivers, Timur Timerzyanov and Janis Baumanis have switched to fellow Austrian outfit STARD, owned by Manfred Stohl, which will make its debut in World RX this year with a pair of similar Ford Fiesta Supercars.

Jean-Baptiste Debourg will compete full-time in an ex-Team Peugeot-Hansen 208 with the DA Racing squad, while former double British Rally Champion Guy Wilks will race an ex-Johan Kristoffersson Volkswagen Polo in the series.

Gigi Galli’s squad will operate under Hungarian team Speedy Motorsports entry to run a Kia Rio for Lukcas Kornel. Galli is expected to compete himself in a second Rio later in the season

Former event winner Robin Larsson won’t contest a full-time World RX campaign and has switched to the European Championship with his private Audi A1 Supercar.

Rene Munnich’s All-Inkl.com squad also isn’t on the list of permanent entrants but is expected to make selected appearances through the year.

*The points scored by Nitiss and Hansen will not be added to their respective team's total.