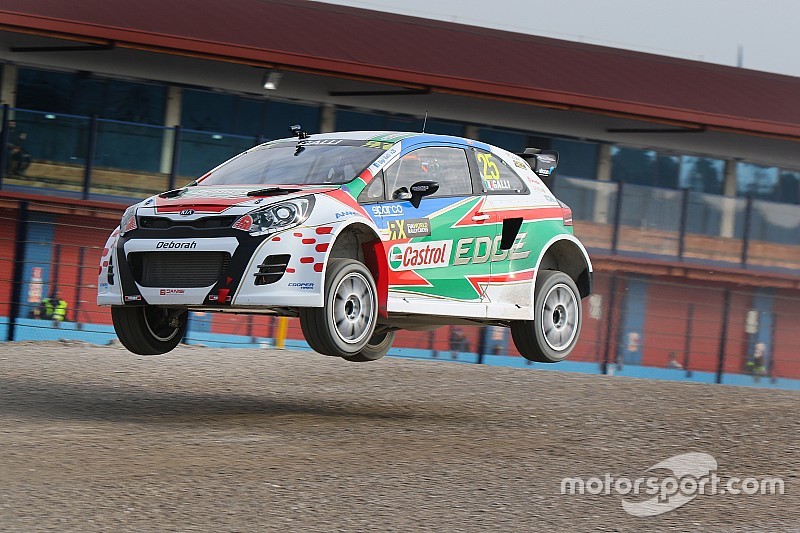 Italian star Gigi Galli is evaluating a return to the FIA World Rallycross Championship for the final two European rounds of the season with his unique Kia Rio Supercar.

The 43-year-old WRC podium finisher will go through with his end-of-season plans provided that he is satisfied with the pace of his car in a test next week.

Galli debuted the Rio at his home round of the series last season, at Franciacorta in Italy, but technical troubles ruled him out of the event on the first day of competition.

Having originally intended to race in World RX on a regular basis this season, Galli hasn’t campaigned the Rio since its maiden appearance, but will test on the Barcelona World RX circuit on Monday following this weekend’s ninth round of the championship.

If his times are competitive, Galli will race in the 10th and 11th rounds of the series in Latvia and Germany.

“Unluckily last year we had some issues with the car,” Galli told Motorsport.com. “At the beginning of this year we decided not to participate in the championship because the car was still not ready. We focused on working on the car and carried out testing.

"The feeling [in the car] is good, but of course I don’t know where we are because we don’t have any reference.

"This is the reason why we will use the opportunity to test in Barcelona the day after the race, just to see in general how the feeling is and how the comparison is [to the World RX laptimes]."

Should his re-developed Kia be on the pace at the Barcelona test, Galli will race in Latvia and Germany with a view to competing more regularly next year. But the Italian says his focus remains solely on this season.

“We have made the entries, and my wish is to go into this fantastic championship and try to see if we can get used to it a little bit,” he said.

“I am focused on these two races. I hope we can have some good fun and some good experience. I don’t want to wish for anything more.”

Galli cites the late nature of the car’s completion as the cause for the problems faced last season, and is quietly confident that he is now in a better position.

“The car arrived very late [for Italy last year[, and we were very much at the beginning of the project. We had some work to do on everything.

"Like I said, the feeling with the driving is good, now I have to ask the clock what it thinks. Hopefully everything will go well and we can enjoy it, that would be the best dream that we could hope for.”

Galli made his rallycross debut at Franciacorta in 2014, driving an OlsbergsMSE run Ford Fiesta, and just missed out on qualifying for the final, before embarking on his own Kia project.