Ekstrom to miss first DTM race since 2001 for WRX finale 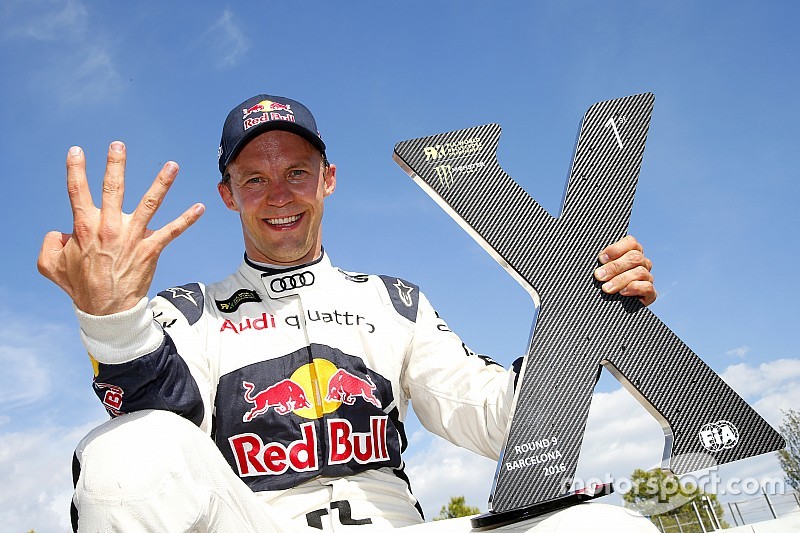 Two-time DTM champion Mattias Ekstrom will miss the final round of the German touring car series as he bids to win his first ever FIA World title, which will mark the first time he has missed a round of the DTM since 2001.

The Swedish driver will compete in the penultimate round of the FIA World Rallycross Championship at the Estering in Germany on the same weekend, which he currently leads by 10 points with three rounds remaining.

Unlike at the DTM opener in May which was joined at Hockenheim by World RX, where Ekstrom won his first event of the year, the two events take place 500 kms apart on October 15 – 16, meaning that Ekstrom can only race in one of the two events.

There has been doubt over Ekstrom’s participation in the Estering round of World RX with his own team, but his DTM employers Audi Sport have given him dispensation compete as he bids to win the title.

“I’ve had the question (about what I will do) so many times in the last couple of months. To be fair my job is to do DTM. My aim before the season was to fight for my third DTM title,” said Ekstrom.

“Everybody knows I’ve had some hiccups, especially at one race, where I lost the championship fight. I was allowed to do rallycross combined with DTM if I was allowed to keep my priority one on DTM.

"For 15 years I haven’t missed one single race, which is pretty special, so if you want to stop that sweep of racing there, it’s quite a big decision for me and also for Audi, because it’s something I feel you need a very good reason for. I feel I have done everything I can to ask for an exeption to ask to sit out [the DTM round].”

The entry deadline with the FIA for entry to the Estering event closes today Thursday 22.

“I have to send a massive thank you to my bosses at Audi Sport. Being given green light to realise a childhood dream is nothing I take for granted,” continued Ekstrom.

“I have never ever been close to winning a FIA World Championship title before and I’m proud and honoured that my bosses are giving me this chance.

"Rest assured that I will go flat-out to pay them back. I want to take a step towards the big trophy not only for me and my team EKS, but also for Audi Sport.”

The Swede, who won his fourth World RX round of the season last weekend in Barcelona to retake the championship lead from season-long rival and two-time World RX champion Petter Solberg, will continued to be partnered by Finn Topi Heikkinen at the event.

Solberg and Ekstrom has previous form at the Estering circuit, the pair finished first and second at the venue in 2014 in a photo-finish as Solberg exited a final lap joker. The Norweigan took victory on that occasion by a record five thousandths of a second.

Ekstrom’s EKS team also currently leads the Teams’ Championship with the 10th round of World RX taking place in Latvia next week.

Rast had made his DTM debut with Audi earlier in the year, standing in for an injured Adrien Tambay in the Sunday race at Zandvoort.

Rustad to compete with Munnich in Germany WRX