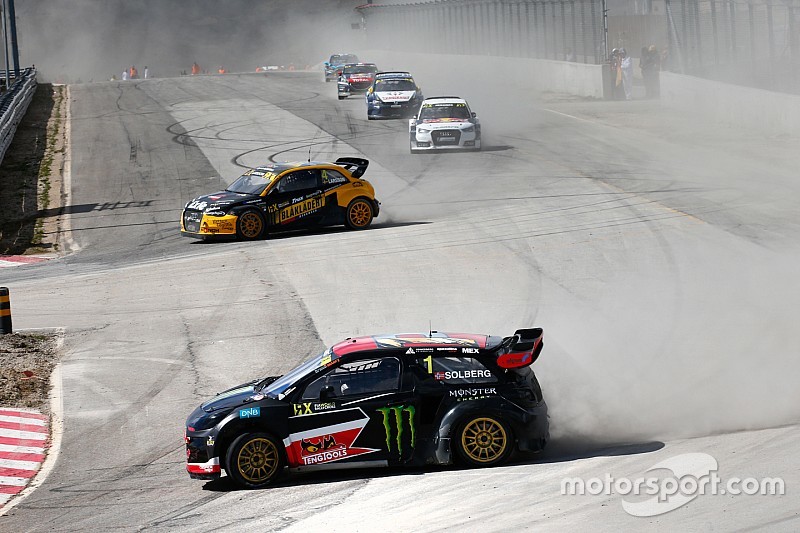 World Rallycross champion Mattias Ekstrom has welcomed WTCC's plans to introduce joker laps in 2017 - and said more motorsport categories, including F1, should look into the concept.

It was announced earlier in the week that the WTCC is set to feature joker laps in its street circuit races at Vila Real and Marrakech next year, pending approval of the concept by the FIA.

In FIA's World Rallycross series, joker laps - alternate routes within the track layout - serve to add on a few seconds to the laptime and are to be taken once by each competitor in a given heat.

Series champion Ekstrom, who is also a two-time champion of DTM, says the concept makes for a "natural" way to spice up the action - and reckons more categories should look into it.

"I think the joker lap is one of the best things for modern motorsport - as the time difference, especially at the top, is so small," Ekstrom said at the FIA Prize Gala in Vienna.

"If you're a tenth a lap faster, you can't really show that off. If you have a joker lap, you can take it, have at least a chance to attack without having to launch a physical attack in the corner.

"I think it adds a bit more spice, you can use it as a defending tool - to joker early and try to cover - and you can also use it another way and stay out.

"I definitely think that this is something that motorsport in general, not just WTCC, has to look into. People who come to me, who are no rallycross experts, they find this format interesting. It's something natural that is happening."

The Swede argued that joker laps were a good alternative to pitstops, which "make the gaps too big", and also said the concept was much preferred to sportscar racing's Balance of Performance.

Ekstrom went as far as to suggest that the concept could work for modern F1, where cars are closely matched but drivers struggle to follow each other through the corners.

"In F1, if you see how close many races were and it's difficult to follow, if you have a joker lap someone has to do at a certain time, you can also time it different to get free air for a couple of laps, and that time you can launch your attack," he explained.

"I think it's something that could work for other categories as well, not only rallycross or WTCC."

Jose Maria Lopez and Yvan Muller, who have seven WTCC titles between them and are bowing out of the series after finishing first and second for Citroen in 2016, have both said they would welcome the category experimenting with joker laps.

"Why not?" Muller asked. "It's like the [time attack format] MAC3 - everyone said 'ah, it's a crazy thing' and so on. It's not that bad, it's something new. And when it's new and it shows something different, it's always a good thing.

"When [WTCC boss] Francois Ribeiro talked about it two or three years ago, many people thought 'oh, he's crazy' - but maybe in three years' time we'll find it very normal. We have to try new things, to bring new positive and attactive things for motor racing. It can be a good idea."

Lopez added: "I'm more a conventional motor racing [fan], but I think motor racing is like a couple of as well - you need to find new things.

"We know sometimes fans want more, more fights, they want to see interesting races. I think that's what it's all about. We have these things, these changes, different things, and we need to go through and experiment a little bit - and see if the fans like it, if the constructors like it.

"I've seen [joker laps] in Argentina's Super TC2000 [touring car series], they did it one race this year.

"Yeah, if it works, if it's really working for the people and people enjoy it, that's what we all want. We want motor racing to keep growing and bringing new fans to the races."

Hansen named 2016 Rookie of the Year at FIA Gala