Championship insight: What can happen in Italy? 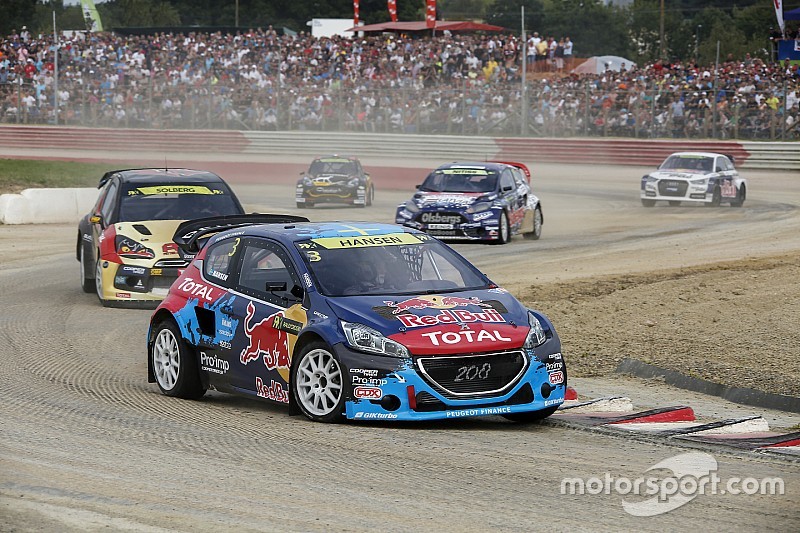 Will Solberg win the title in Italy?

The penultimate round of the FIA World Rallycross Championship takes place this weekend at Franciacorta, Italy, where Norway’s Petter Solberg leads by 19 points over Sweden’s Timmy Hansen in the championship standings.

Hansen significantly cut into Solberg’s lead two weeks ago in Turkey, meaning that the fight for the championship may well go down to the wire at the final round in Argentina. Even if Solberg failed to score any points in Italy, Hansen can’t win the championship this weekend. There are many points permutations surrounding Solberg possibly taking the title at Franciacorta for the second year in a row, but most simply, if Hansen fails to make the semi-finals and Solberg scores maximum points, the 2014 champion would retain his crown.

Things are not so close in the teams’ championship. Team Peugeot-Hansen currently lead by 79 points over Ford OlsbergsMSE. If the Peugeot-Hansen squad can maintain their current run of form and both Hansen and Davy Jeanney qualify for the semi-finals this weekend to score good points, they are likely to take the title. The team needs to be clear by 56 points heading into the final round to be sure of the crown. “We’ll do as we have done the last few races, just focus on getting the cars in the right setup, to get both drivers happy and help them as much as possible and then we’ll see how far it can take us,” said team principle Kenneth Hansen about the team’s title prospects this weekend. “In sport everything can happen, so it’s better not to calculate too much. But, we also must remind ourselves not to take too much risk. We’ll try to play our cards right.”

The Italian event also hosts the final round of the FIA European Rallycross Championship, the RX Lites Cup and the FIA European Rallycross Championship for Super1600. In Supercar, Norway’s Tommy Rustad leads France’s Jerome Grosset-Janin by six points, meaning the championship fight could go down to the Euro RX final on Sunday afternoon. There is also a battle for third overall, between Finland’s Joni-Pekka Rajala and Norway’s Ole Christian Veiby, the pair currently separated by seven points.

World RX prepares for final European round in Italy

Solberg and Kristoffersson jointly lead Italy RX after day one