Belgium World RX: Solberg ahead on Day 1 despite damage 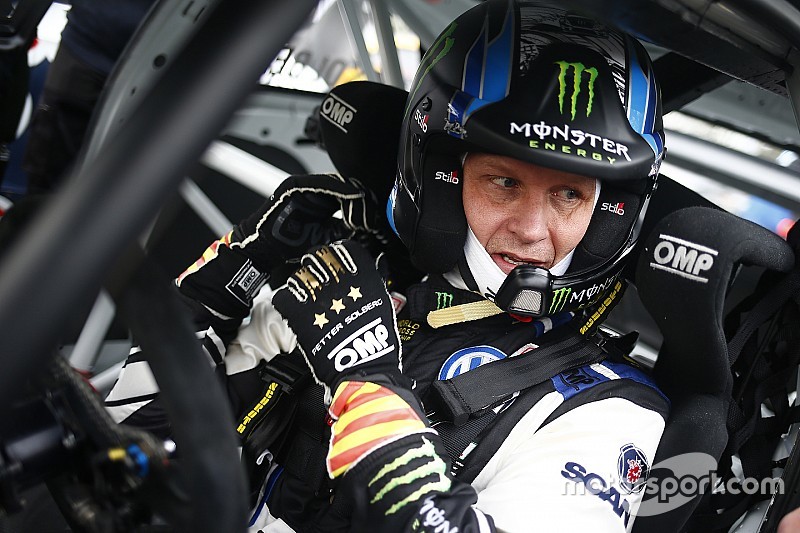 Petter Solberg leads the Belgian round of the World Rallycross Championship overnight at Mettet, despite damaging the steering on his Volkswagen Supercar at the start of his Q2 race.

The Norwegian set the fastest time on a drying track in Q1, half a second faster than Sebastien Loeb to claim pole position for the final race in Q2.

From fourth on the grid it was Solberg's teammate Johan Kristroffersson who made the best start in the Q2 encounter.

Solberg attempted to tuck into the inside of the track for the tight right-hand first corner and touched the barrier, damaging his VW's steering.

Solberg maintained the advantage on the opening lap as Kristoffersson lost out, forced wide in the first corner by a touch from Timmy Hansen's Peugeot.

Pressuring Solberg for the lead, Hansen took his joker on lap two and made a small mistake on the entry to the compulsory extra-route, but immediately recovered with the fastest lap of the day and passed Solberg in a drag race to the first corner of lap four after the Norwegian had also taken his joker route.

Hansen won the race and is third overnight, but it was his Swedish compatriot Mattias Ekstrom who was fastest in Q2, recovering from a slower than optimum start in his race and conceding the lead at the first corner from pole position to teammate Andreas Bakkerud.

Bakkerud later ran into boost control problems with his Audi and dropped back to third.

It was a strong day for the Peugeot team, Loeb following his second fastest time in Q1 with fourth in Q2 to be fourth overnight.

His teammate Kevin Hansen was sixth, the pair sandwiching points leader Kristoffersson in the Intermediate Classification.

Former world rally star Francois Duval could only manage 14th time in Q1 driving an Ex-EKS Audi but was eighth in Q2 to climb into the semi-final paying positions in 11th, two places down on Frenchman Guerlain Chicherit.

Chicherit escaped disaster at the first corner of Q1 when he was squeezed into the inside barrier - a move for which Kevin Hansen received a reprimand - sending his car onto two wheels.

Chicherit then won his race in Q2 in another solid performance in the Prodrive-built Renault.