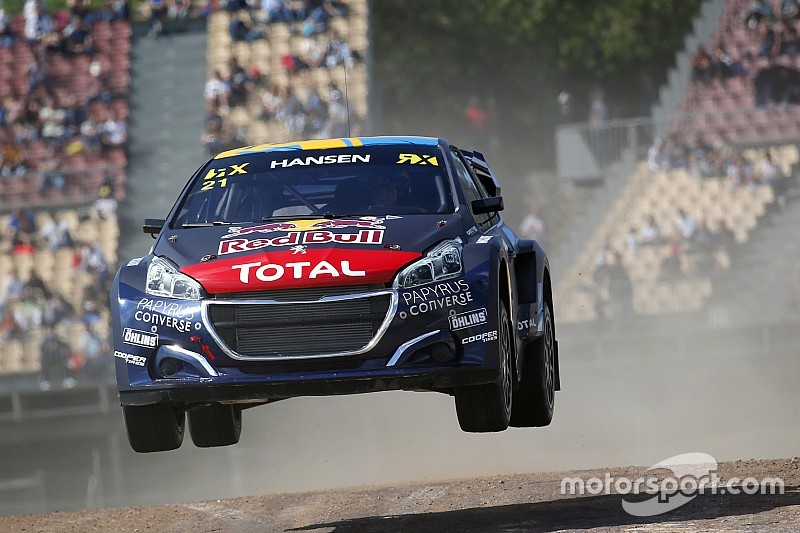 Timmy Hansen completed a weekend of domination in Barcelona by claiming his first victory of the World Rallycross season.

Hansen’s sixth career victory came thanks to leading through the qualifying stages at Barcelona’s Formula 1 circuit, with a pair of fastest times in Q3 and Q4 to back up his overnight lead, before leading both his semi-final and the final with conviction to claim victory.

Younger brother Kevin was second at the end of qualifying, then also won his semi-final to line up alongside his Hansen MJP teammate on the front row of the final in their pair of ex-works Peugeot 208s.

While Timmy had an untroubled run up front, Kevin had to defend hard from RX Cartel driver Andreas Bakkerud, who passed Niclas Gronholm at the exit of Turn 1 to run third early on.

The Hansen brothers split their strategies in the final laps, Kevin taking his compulsory joker on the fifth lap, before passing Gronholm - who took the joker early on - and Janis Baumanis.

Timmy Hansen led Bakkerud into the joker on the final tour and while the leader maintained track position, Bakkerud dropped behind Kevin Hansen in the final corners of the race.

Kevin Hansen’s second position means the Swede maintains his points lead, while Bakkerud climbed onto the Spanish podium for the third year in succession.

Gronholm wound up fourth, passing Baumanis when the STARD driver took his joker on the final lap, while European Championship graduate Cyril Raymond also climbed a position to finish fifth in his first World RX final.

The French driver made it into the all-important last six by overcoming Gronholm’s teammate, Timur Timerzyanov in the semi-finals.

Gronholm to miss Spa WRX round with appendicitis