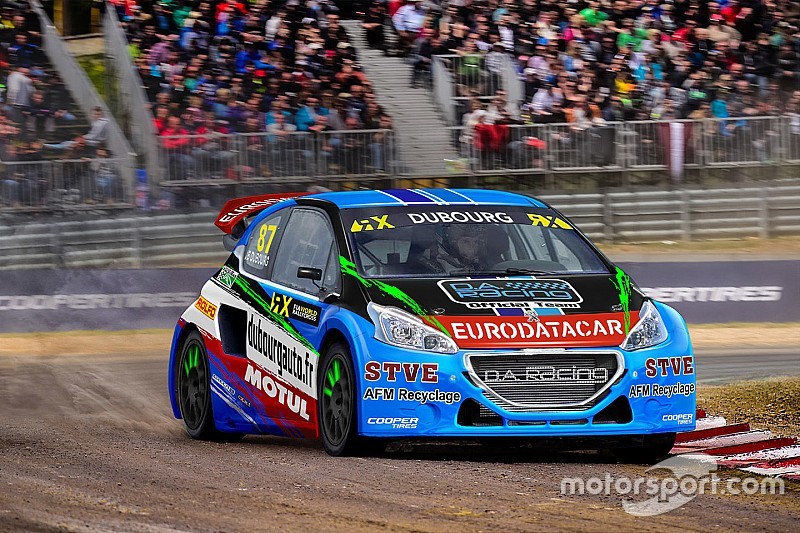 Andros Trophy champion Jean-Baptiste Dubourg will race full time in World Rallycross this season in a Peugeot 208 WRX, and will be joined at five events in the Team DA Racing-Eurodatacar squad by ex-WTCC racer Gregoire Demoustier in a second 208.

Dubourg finished on the podium at his home round of World RX in 2015 racing a Citroen C4 and will race as an individual entrant in the 12-round World RX series this year, with former Sebastien Loeb Racing driver Demoustier taking part in three of the four opening rounds of the year in Spain, Portugal and Belgium, and the two ‘flyway’ races in Canada and South Africa.

“Having the opportunity to compete with not only the best rallycross drivers, but from motorsport in general, is a childhood dream come true,” said Dubourg, who claimed Andros Trophy titles in 2016 and earlier this year.

“The commitment of this programme is a new step in the ambitious Team DA Racing-Eurodatacar project started in 2012.

“I have had the opportunity to compete at many of the circuits that make up the World RX calendar, we know what to expect.

"Faced with the biggest players in world motorsport, our objective will be to prove the knowledge of our private team in the face of the undoubtable world-class competition. We must seize every opportunity this year.”

Demoustier is also set to race in French and European GT4 and the TCR International series this year, but the opening round of World RX will be his first experience of competing in rallycross.

“It was impossible to resist the lure of rallycross. In the World Rallycross Championship, I’m entering a new universe – I have everything to discover,” he said.

“The race format with the qualifying races, the elimination system for the final stages and of course the joker lap is totally different from what I’m used to, but I think it's a very interesting format.

The French driver previously competed in the Andros Trophy series 10-years ago with the Bordeaux-based team.

“Andros Trophy allowed me to grasp changes in grip levels and that will be a bonus in helping me to familiarise myself with loose surface in rallycross, which is totally new to me.”

The Team DA Racing-Eurodatacar squad is hoping to run its second 208 in as many events as possible, while it will also run its Citroen DS3 Supercar in the five-round FIA European Rallycross Championship for Andrea Dubourg.