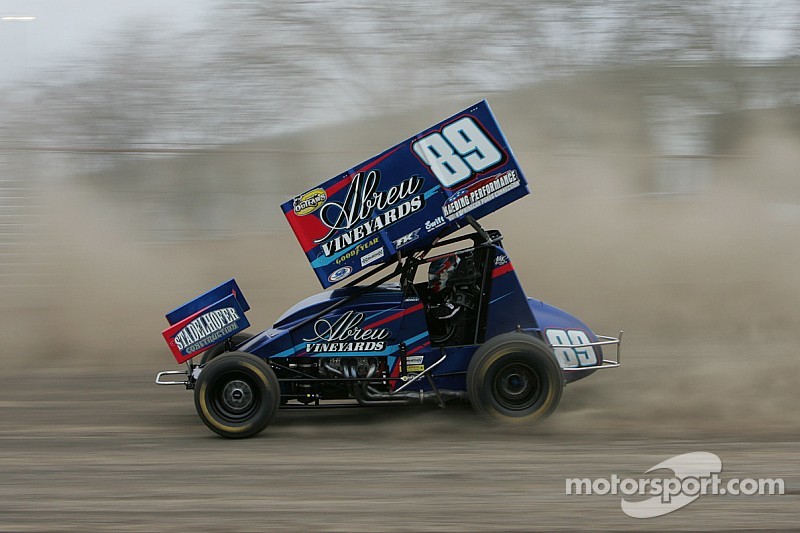 Scores his second win in as many weeks and the third of his career after battle with Terry McCarl.

STOCKTON, Calif. - Four different leaders battled it out in Sunday night's wild FVP Western Spring Shootout at the Stockton Dirt Track, but it was Rico Abreu who outlasted the competition and captured his second World of Outlaws Sprint Car Series win in as many weeks.

With ten laps to go, Abreu caught Terry McCarl, then the leader, as the two headed into the first turns. When they exited turn two, it was Abreu driving his No. 24 Abreu Vineyards car around McCarl on the back straight. Abreu skillfully worked his way through lapped traffic in the waning laps and held off McCarl to score his third career Outlaws win.

"Anytime you get a chance to win a World of Outlaws race… it's unbelievable," said Abreu, a St. Helena, Calif. native. "I came into this year just trying to get another one under my belt and now I've got two."

I just need to understand how to get my car turned and pointed straight on the restarts and not let it skate up the track.

Abreu said the restarts throughout the feature proved critical to finding success and while he was up and down, he was able to make the moves he needed when it counted.

"I just need to understand how to get my car turned and pointed straight on the restarts and not let it skate up the track. It gets super slick so you're just searching for anything at that time and then guys are just freight training you. Restarts definitely have to go your way. These guys are like sharks on restarts. It's where they get their positions and you've just got to get good at them and be better than everybody else.

Abreu's win tonight gave him four winged sprint car wins at the Stockton Dirt Track. No other driver has more than one win at the track. Abreu also took home the quick time during qualifying on Sunday.

Daryn Pittman led the field to the green flag on Sunday night with McCarl next to him on the front row. McCarl jumped to the lead early in his No. 88 Country Builders/SnowPlow.com car as Brad Sweet battled forward. Sweet got around his Kasey Kahne Racing teammate Pittman on lap five to take over the second spot and set his sights on McCarl.

As McCarl hit lapped traffic on lap nine, Sweet closed the gap. He worked his way around McCarl the next lap to take the lead. Sweet's lead though was short lived. As he exited off of turn two on lap 12, he cut down a tire and ended up off track. This put McCarl back to the lead with Daryn Pittman in second and Jason Johnson, who started the feature in fifth, in third.

When the green flag flew, Johnson battled past Pittman for second and then took over the lead on lap 12. He led for the next two laps until Pittman cut down a tire and flipped off track after jumping the cushion. The track went under red flag conditions. Pittman's crew worked feverishly and got him back out on track under a caution a few laps later.

Johnson led the field back to green following the red, but was quickly overtaken by McCarl. Abreu moved into second and farther back, Paul McMahan, who started the night in ninth in his No. 51 CJB Motorsports car, had worked his way up to fifth. As the field rounded the fourth turn, disaster almost struck as Jason Sides flipped in the middle of four. Amazingly, he did a full mid-air spin, landed back on all four tires and continued on. He finished the night in 17th.

A yellow flag came out on lap 16 after Joey Saldana had a tire cut down. The green flag again waved but the restart could not be completed after Colby Copeland flipped in turn four.

On the final restart of the night on lap 16, Paul McMahan began his battle with David Gravel for the third position. He eventually took the spot on lap 18.

"Luckily, we had that red flag and went single file just because the outside was definitely not the place to be," Abreu said. "Followed McCarl there for a minute and I've got to thank Daryn, he actually showed me the rubber, the better line on the bottom of one and two."

By lap 20, Abreu had caught and then eventually overtook McCarl for the lead. McCarl worked to get a run on Abreu in the closing laps but got caught up by the lap car of Bud Kaeding. McCarl expressed his frustration with the driver after the race.

"Bud Kaeding there - I don't know if he was trying to block me or what he was up to there but I'm not real happy with him right now."

"It's always great to finish on the podium with the Outlaws," said McCarl, who closed out the night in second. "It's just disappointing. Kind of gave one away there at Tulare the other night. We didn't really give this one away - Rico just had a better car and drove by us."

McMahan closed out the night in the third position after battling forward from ninth. He said his fifth place qualifying position put him in a tough spot for his heat race which ultimately left him out of the dash.

"Had a good opportunity there on the front row (of the heat) but the inside just wasn't very good there in the heat races and Kraig (Kinser) was able to get out in front of me," McMahan said. "Starting ninth I abused my tire real bad and there at the end I had nothing left. I've got no tread left on my tires so I was just happy here to finish third."

"This is a great race track," McMahan said. "I never got to race here in my younger days and we seem to run well here every time we come here. We were a few spots short but Rico had a great car, Terry had a great car and we'll come back and move on to Chico next week."

The California swing continues for the World of Outlaws Sprint Car Series as The Greatest Show on Dirt returns to Silver Dollar Speedway in Chico, Calif. on March 28 for the Mini Gold Cup and Antioch (Calif.) Speedway on March 29.