A perfect strategy, three strong drivers and a fast and reliable race car: Young Driver AMR had all the ingredients for a perfect start into the 2013 FIA World Endurance Championship turned this into a debut victory at the first round of the season at Silverstone. 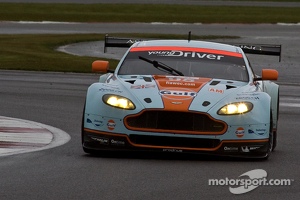 After six hours of racing, the all-Danish driver line-up took the class victory by a solid margin of three laps.

Allan Simonsen started the race from second position in class and was running second behind a sister Aston Martin during the first hour. After the first round of pit stops, the Dane went into the lead and the Young Driver AMR drivers never looked back from that moment on.

A perfect tire management was the key to the win. Aston Martin Racing/Young Driver AMR decided to double stint the tires, which gave Nygaard/Poulsen/Nygaard an advantage over the competitors, who changed tires at every single stop.

Nygaard then took over the Aston Martin Vantage from Simonsen and drove a strong double stint before Kristian Poulsen brought the Vantage to the finish line in first position.

"The win in our very first race in this championship without any single problem and with this margin is just a dream", Young Driver AMR´s Jan Struve said after the race.

"Our mechanics, engineers and drivers did a zero-error-job and we really had a great first race. It’s a perfect way to start into the season. After our pre-season testing, we knew we would have a very strong package, but I would never have expected to take such a great victory here at the home track of Aston Martin. That makes this victory a really special one for us."

The next round of the World Endurance Championship will take place at Spa-Francorchamps on May 4th.

Allan Simonsen: "We decided to double stint our tires and straight away after we did that, we had a gap and we tried to manage it. That worked really well for us today, as pace wise we were particular much faster then our competitors.

We really had no problems, our driver combination worked out well and the car ran perfect. . When you have a day like this and nothing happens, plus you also have quick pit stops, you end up with a great result."

Kristian Poulsen: "I was the last one to get in the car today and we had a good gap, so my job was to bring the car home."

Christoffer Nygaard: "Even if we had a solid lead when I went into the car, I was pushing like hell, as this is an very important race for us and Aston Martin Racing.

This is the home turf of Aston Martin Racing and we wanted to win this. From the outside it may have looked easy, but for sure it wasn’t. Now we have 25 points on our score which looks really good, but we will keep on pushing."