The WEC 6 Hours of Spa-Francorchamps takes place at the famous Belgian circuit in the Ardennes on Friday 3 and Saturday 4 May and features a 35 car grid.

More fans of endurance racing around the world will be able to watch the FIA World Endurance Championship with another significant increase in the TV coverage. 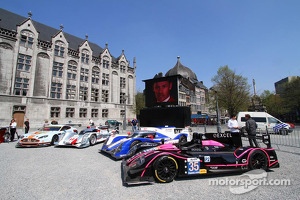 Agreements have been reached with Sport TV 3 in Brazil, part of the TV Globo group, with the first and last hour of the race in Belgium live,live coverage on Al Jazerra in the Middle Eastand also on Canal + Desportes & Sportmania in Spain.

In addition RTBF in Belgium will be showing the first and last hours of the WEC 6 Hours of Spa-Francorchamps live, plus live streaming of the entire race via their YouTube channel. With the additional coverage provided by these and the other broadcasters around the globe, over 340million homes have the opportunity to watch the second round of the FIA WEC in Belgium.

Gerard Neveu, CEO of the FIA WEC, said: “The agreements in Brazil, Middle East and Spain are good news for championship and endurance racing. As we explained at the start of the season 2013 was going to be a lot of hard work to secure the agreements we need in the different countries and regions we need visibility.

These new agreements, in addition to the one announced previously with Eurosport, are a good step forward, with 36 million potential viewers in South America, 2.5 million in the Middle East and 2 million in Spain. Negotiations continue in other areas and we will have more announcements in the near future.”

The production and support operation for the television coverage includes 20 static cameras around the circuit, a “Super Loupe” high speed camera for recording slow motion action, 2 HF Cameras, a helicopter for overhead images,8onboard cameras all managed by a crew of 60 people led by Olivier Denis and controlled from one of the most sophisticated Visual outside broadcast vehicles in Europe.

The WEC 6 Hours of Spa-Francorchamps takes place at the famous Belgian circuit in the Ardennes on Friday 3 and Saturday 4 May and features a 35 car grid for the traditional final rehearsal before the 24 Heures du Mans on the 22/23 June.