Jacques Nicolet and Keiko Ihara will share no. 45 Morgan-Nissan with young Chinese hotshoe, David Cheng, the only Chinese driver in the race.

The second-last round of the 2013 FIA World Endurance Championship, the Shanghai 6 Hours, will take place in China on 10th November. Sarthe team OAK Racing has entered its three Morgan-Nissan LM P2s built by its constructors’ department, Onroak Automotive, shod with Dunlop tyres. The no. 35 Morgan-Nissan, currently leading the world championship, and no. 24 will have their usual driver line-ups, while Jacques Nicolet and Keiko Ihara will share no. 45 with young Chinese hotshoe, David Cheng, the only Chinese driver in the race. 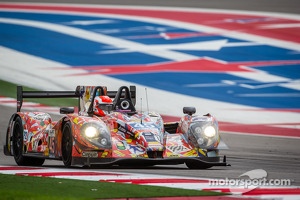 Cheng will be on familiar territory. While the Shanghai 6 Hours is his first race in the WEC he’s already familiar with the 5,450-km circuit and the Morgan LM P2, which he has been driving in the Asian Le Mans Series for the OAK Racing Team Total since the start of the championship. He recently won the Shanghai 3 Hours with his fellow-countrymen Ho Pin Tung and Shaun Thong, a brilliant confirmation of his progress since the start of the season. He began racing in endurance in 2011 in Formula Le Mans in the American Le Mans Series.

This year he is also competing in the US Series and he won his category in the Sebring 12 Hours in March. The young Chinese driver can count on the support of Keiko Ihara and Jacques Nicolet to fly his country’s colors in Shanghai.

For this event the no. 45 Morgan-Nissan LM P2 will have a special livery, which combines the design of the Art Car of the 90th anniversary of the Le Mans 24 Hours and the colors of Total Lubricants China, the team’s partner in the Asian Le Mans Series. After the aborted race in Japan the whole OAK Racing Team is looking forward to taking on its rivals in proper conditions.

Bertrand Baguette, Martin Plowman and Ricardo Gonzalez in the no. 35 Morgan-Nissan LM P2, currently lying first in the championship ratings, are determined to increase their lead. Olivier Pla, Alex Brundle and David Heinemeier Hansson in no. 24, who are in third place behind Pecom Racing, are going to go flat out to close the gap and add a top-3 finish to their results.

Sébastien Philippe, Team Principal: “Although the organisers’ decision to stop the race at Fuji was completely justified, the team left Japan feeling frustrated and disappointed by this non- event! This makes us all the more determined to have a great race in Shanghai and score as many points as possible in the championship. We’re also delighted to welcome David Cheng for his first event with the team in the WEC: he races regularly with the Asian arm of our team, OAK Racing Team Total. We hope it’ll be a great experience for him in his own country with Keiko and Jacques.”

Patrice Devemy, Total Lubricants China General Manager: “Shanghai, the city where Total Lubricants China is established, is pleased to host the WEC once again. More than one of the largest cities in the world, Shanghai is the center of the entire Chinese automotive industry. The OAK Racing Total team is about to have its first race in the World Championship in China after its recent success in Zhuhai in the Asian Le Mans Series. So this is an exciting event for Total to demonstrate the performance of its products. Our Chinese driver David Cheng will do his best with his teammates to proudly fly the Chinese colors on the track. The cars and the team are competitive, and I’m sure that OAK Racing will consolidate its leadership in the championship. From Good to Great - together!”

David Cheng, no. 45 Morgan-Nissan LM P2: “It is very exciting for me to have the opportunity to compete in the Shanghai round of the WEC with our OAK Racing. To have another chance to race in front of my home crowd and our partners Total Lubricants China and Orsun is very special. As the only Chinese driver in the field, I'm looking to bring home the best results we can and carry on the momentum from our recent victory in ASLMS Zhuhai.

Martin Plowman, no. 35 Morgan-Nissan LM P2: "I'm really looking forward to getting to race at China. Shanghai is another new track for me, but the team has helped me to overcome the challenge of going to many new tracks this year. It was a shame that we didn’t get to race in Japan, although I can't complain about the result and points we left with. The 35 car is 100% focused on winning the championship and I will do everything in my power to help get the job done!"

Alex Brundle, no. 24 Morgan-Nissan LM P2: 'It doesn't seem long since we were disembarking our flight home from the latest round of the series but I am more than ready to go again. Shanghai will be another venue for me to learn and another chance to score maximum points for the team and bring home some silverware. Both are possible and we will be working hard for those objectives this weekend.'