Mike Conway: "We now know that we just need to continue pushing to get the same result every time.”

London, UK – Mike Conway had his first victory in the LMP2 category of the World Endurance Championship, when he started on pole for the 6 Hours of Sao Paulo today. 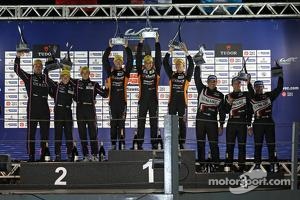 After a 10-week summer break, the No. 26 G-Drive Oreca-Nissan returned to action with the improvements the team had made over the summer being very evident as Conway topped the timing sheets during second practice in the LMP2 class.

The 30-year-old, with his teammates John Martin and Roman Rusinov then continued showing their dominance during qualifying with Conway setting the fastest time in his second lap to capture the pole by 0.5 seconds, which by class standard, is a significant gap over the runner-ups.

When the green flag was shown at the Interlagos circuit, it was Conway who was behind the wheel at the start, maintaining his position for his entire stint. Rusinov and Martin then continued to lead the LMP2 class crossing the finish line in fourth overall and bring home the team’s first victory this season and Conway’s first win in sportscar racing.

“I am obviously very happy with the result we had this weekend,” said Conway. “It has been a long time coming. We have been very strong in the first couple of races, leading nearly every one and showing we were very fast. To get the pole, fastest lap and win this weekend is very cool. Great job by all the team and my teammates, it’s a great result.

The trophy will be proudly displayed on my mantelpiece at home. I’m looking forward to the rest of the year now because we have had this pace all year and to finally convert it into a result is great. We now know that we just need to continue pushing to get the same result every time.”

The fifth round of the FIA World Endurance will be the 6 Hours of Circuit of the Americas in Austin, Texas from September 20-22, 2013.