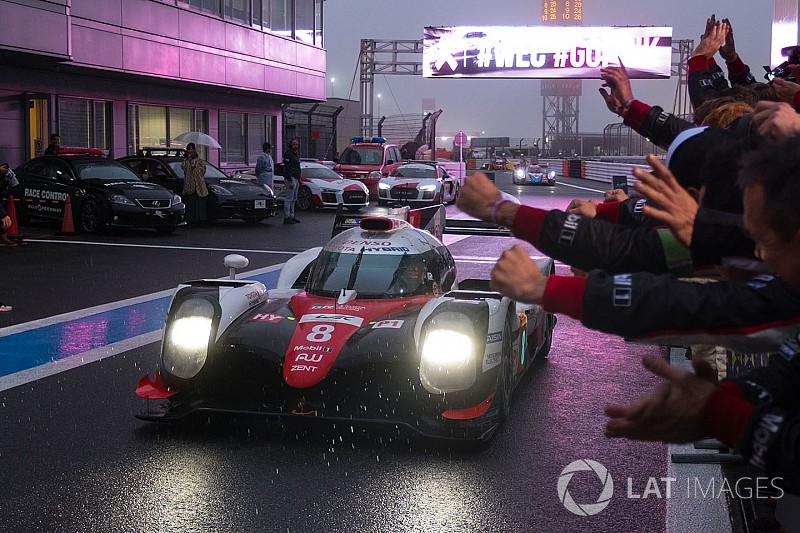 The winning Toyota would have been able to complete Sunday's Fuji World Endurance Championship race without stopping for fuel had the race been restarted, the Japanese manufacturer has insisted.

Kazuki Nakajima had been due to pit in the Toyota TS050 Hybrid he shared with Sebastien Buemi and Anthony Davidson on the lap that the red flag was shown for a second and final time after four and a half hours.

The Japanese driver was told to abort the stop at the last minute and line up his Toyota on the start-finish straight in anticipation of a restart.

The six-hour event was set to begin again for a final 10-minute dash to the flag, before race officials decided to call time on the race because the conditions worsened again.

Toyota Motorsport GmbH technical director Pascal Vasselon told Motorsport.com: "There were still 10 minutes of fuel left in the car; even if the race restarted we could have finished [without refuelling]."

Vasselon's comments came after Nakajima described the victory as "a bit lucky but deserved" in the immediate aftermath of the race.

The #8 Toyota, which Davidson didn't get to drive in the race, had made the second of its two pitstops just after the three-hour mark.

The second-placed Toyota and the third-place Porsche both made three stops.

The Porsche in fourth place was in the pits when the red flag came out after completing approximately one hour and 50 minutes since its previous stop.

The long stints resulted from the wet conditions, a total of seven full safety cars (including their deployment for the two starts) and one full-course yellow virtual safety car.

The #7 Toyota, which finished second in the hands of Kamui Kobayashi, Jose Maria Lopez and Mike Conway, might also have had to pit had the red flag not come when it did.

The team's telemetry was indicating a right-rear puncture, but when the team checked the pressures after the cars stopped on the start-finish line, no abnormalities were found.

Vasselon said the team suspected it was a "measurement problem".

The race, round seven of the 2017 WEC, was initially stopped after one hour and 18 minutes as low cloud descended on the circuit.

It was restarted 32 minutes later before stopping again for the same reason over two and half hours later.

The leaders completed 114 laps, but the result was backdated to lap 113 in the final results.

Full points were awarded because the race reached 70 percent of its scheduled six-hour duration.