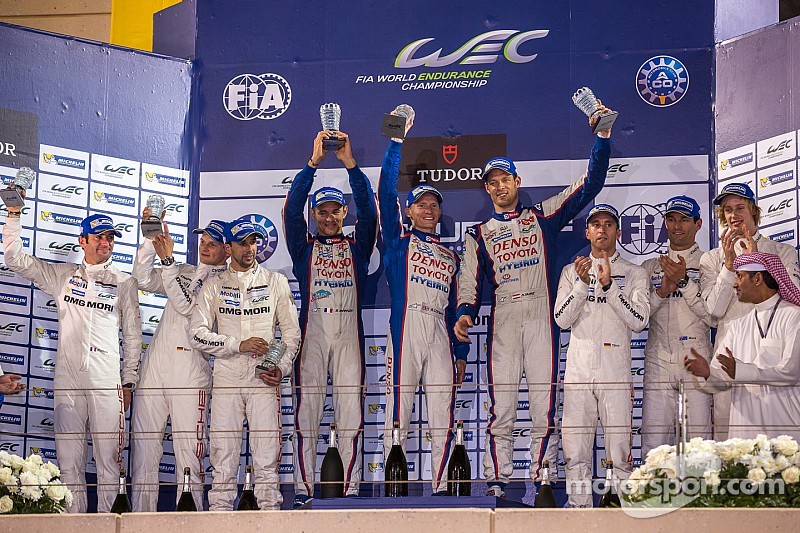 Toyota celebrated both success in the FIA World Endurance Drivers’ Championship and winning the 6 Hours of Bahrain race today.

After a difficult race that saw the no8 Toyota TS040 spend 16 laps in the garage to change an alternator, Anthony Davidson and Sebastien Buemi took the chequered flag in 11th overall to clinch the FIA World Endurance Driver’s Championship. The sister crew of Alex Wurz, Stephane Sarrazin and Mike Conway claimed their first race win of the 2014 season after a flawless performance in the day/night spectacular in the desert.

Filling out the podium at Bahrain were both Porsche 919 Hybrid entries with the no14 car of Marc Lieb, Neel Jani and Romain Dumas just heading home the no20 entry of Mark Webber, Brendon Hartley and Timo Bernhard.

Starting from pole, the no14 Porsche kept Sebastien Buemi at bay for several laps before losing out as the Toyota swept into the lead. However the pace of the two 919s were to be reckoned with throughout the race, with both cars leading during the 6 Hours of Bahrain. The German team were rewarded with their best result of the 2014 season.

The two Audi R18 e-tron quattros were 4th and 5th, with the no2 Audi of Fassler / Lotterer/ Treluyer finished one lap behind the winning Toyota and one lap ahead of the no1 R18 of Kristensen/ Di Grassi / Duval. The 22 championship points has kept Audi’s slim world championship hopes alive for the final race in Brazil in two week’s time.

The no13 Rebellion car of Dominik Kraihamer, Fabio Leimer and Andrea Belicchi won the LM P1-L class after a late race pit stop for race long leaders Nick Heidfeld/Nicolas Prost/Mathias Beche in the no12 Rebellion entry who had to pit near the end of the race to replace an alternator belt and battery. The no9 Lotus CLM-AER suffered a gearbox failure on the opening lap and Pierre Kaffer pulled off the track into retirement.

The LM P2 class saw the usual thrilling race long battle, this time between the no47 KCMG Oreca-Nissan and the title chasing no27 SMP Racing entry. KCMG’s Matt Howson/Richard Bradley and Alexander Imperatori eventually won out, taking their second victory of the season (after COTA), with a well-judged maneuver by Bradley in the fourth hour, sealing the win. The Hong Kong based team had to make a precautionary late pitstop to replace the nose of the Oreca due to a faulty headlight assembly but they came out of the pits still at the head of the LM P2 field.

Late race drama saw Nicolas Minassian serve a stop/go penalty for contact with the no1 Audi R18 e-tron quattro and then technical difficulties with just 15-mins to go forced the car into the pits and retirement. The sister no37 SMP Oreca-Nissan inherited second place in the final moments.

As a result of the no27 SMP cars difficulties Zlobin’s points lead in the LMP2 Drivers’ championship has been overturned by the G-Drive Ligier-Nissan of Olivier Pla/Roman Rusinov and Julien Canal, who score third placed points despite having losing over ten minutes after two lengthy pit stops for repairs to their rear suspension after a collision with their rivals on the opening lap. The Russian team now head to Brazil with a slim 8 point lead in FIA Endurance Trophy for LMP2 Drivers and Teams.

The final race of the 2014 season will take place in Brazil with the 6 Hours of Sao Paulo taking place on the 30 November. Toyota have a 40 point lead in the FIA World Endurance Manufacturers Championship over nearest rivals Audi, but with a possible 44 points available in Brazil the title fight is not yet over.

Both the LM P2 titles are still to be decided with G-Drive Racing and drivers Roman Rusinov, Olivier Pla and Julien Canal on 136 points against the no27 SMP Racing Oreca and driver Sergey Zlobin on 128 points. With a maximum of 26 points on offer in Brazil there is all to play for.

The 6 Hours of Bahrain, the seventh round of the FIA World Endurance Championship, delivered drama, excitement, great racing and – more crucially – World Championship titles for Ferrari and Aston Martin.

Gianmaria Bruni and Toni Vilander in the AF Corse No.51 Ferrari won an intense LM GTE Pro battle through the hours of darkness and, in doing so, claimed the World Endurance Cup for GT Drivers. It is the Italian’s second World GT title but his first with his Finnish team mate, and Vilander's third consecutive victory in the Kingdom of Bahrain. The pair have been formidable competitors this year and used skill, strategy and sheer determination to secure four victories from the seven races held so far this season.

The Ferrari drivers’ victory today was not an easy one by any means and they were pushed hard throughout the six hours by the No.97 Aston Martin Vantage V8 of Darren Turner and Stefan Mücke who came through to finish second, just 1.8 seconds behind. The British-German duo, on fresher tyres than the Ferrari, pushed them all the way to the line to take their third podium finish of the season – one of which was victory at COTA in September. However, the critical factor in the Ferrari’s victory was its ability to complete the race on one fewer fuel stop than its rivals – five as opposed to its rivals’ six.

Third across the line in the LM GTE Pro class was the No.71 AF Corse entry of Davide Rigon and James Calado and this result was crucial in helping AF Corse to clinch the FIA Endurance Trophy for LM GTE Pro Teams. However, with the two Porsche Team Manthey 911 RSRs finishing fourth and fifth in class, the points accrued by the manufacturer meant that the difference between Ferrari and Porsche is now 25 points and, with 26 available at the final round in Sao Paulo, there is still a chance this can be claimed by the German marque.

While Aston Martin Racing just missed out in the Pro category, it celebrated double Championship success in the Am class. David Heinemeier Hansson and Kristian Poulsen, re-joined by Nicki Thiim for this round, scored their fourth class victory of the season to seal both the FIA Endurance Trophy for LMGTE Am Drivers and the title for LMGTE Teams.

The title chase turned in the Danish-crewed car’s favour at the 24 Hours of Le Mans with the double points awarded, but the No.95 ‘Dane Train’ has been consistently fast and reliable all season. It survived a brush with a competitor just before the end of the fourth hour, but otherwise had an untroubled run from flag to flag. Although Aston Martin Racing had already secured the Teams’ Trophy, they didn’t know until this weekend which of their Am cars it would go to, and the No.95 crew has great cause to celebrate.

Taking second place in the LM GTE Am class was the No.81 AF Corse Ferrari 458 Italia of Michele Rugolo, Stephen Wyatt and Andrea Bertolini – the trio’s first podium of the season. Unfortunately there was to be no podium success in either class for Saudi Arabia’s Abdulaziz Al Faisal (No.99 Aston Martin Vantage V9 in LM GTE Pro) or Emirati driver Khaled Al Qubaisi (No.88 Proton Competition Porsche 911 RSR) although the latter finished just off the podium in fourth place in the Am category.

The final four championship titles will be settled in São Paulo

The final round of the 2014 FIA World Endurance Championship will take place in two weeks at the Interlagos circuit in São Paulo, Brazil on Sunday 30th November. The final four championship titles across the four classes will be settled then, and the FIA WEC Prize Giving will take place in Brazil the day after the race.