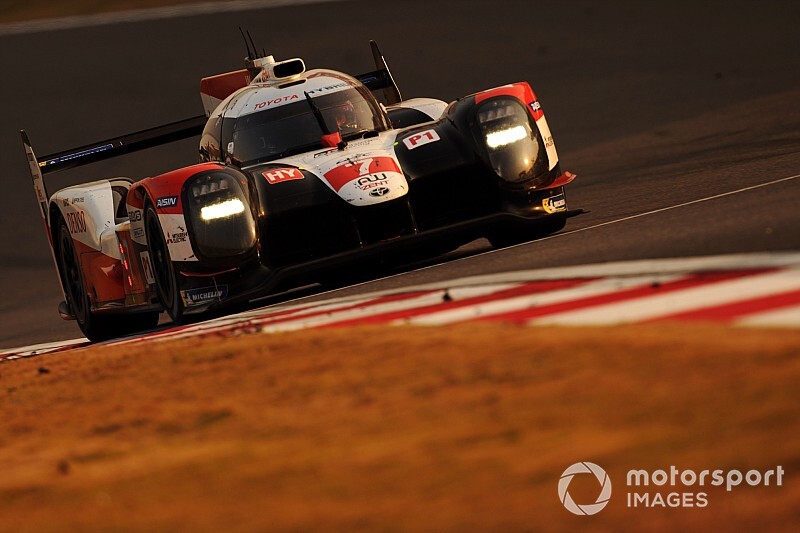 The two Toyotas will race at next month's Bahrain FIA World Endurance Championship round with different levels of success handicaps.

The bulletin confirming the handicaps for the Bahrain 8 Hours on December 14 lists the #7 Toyota TS050 Hybrid with a 2.51s per lap penalty and the #8 sister car with 2.72s.

That is despite both Japanese cars lying more than 40 points ahead of the last-placed car in the championship classification.

The explanation of the new system introduced for the LMP1 class this season issued in August states that "the maximum performance reduction applied may not be greater than the equivalent of 40 points".

But it is understood that when the gap to the lowest points scorer is more than that amount the handicaps are calculated from a 'virtual' last-placed car lying 40 points behind the championship leader.

The three-point gap between #8 and #7 would explain the 0.21s differential in the handicaps between the two Toyotas based on this criterion.

The 2.72s penalty for #8 is slightly down on the 2.74s penalty that both Toyotas carried at Shanghai last month, which reflects the slightly shorter lap at Bahrain.

Rebellion's solo R-13, which won this month's Shanghai round, is listed with a 1.36s penalty for Bahrain. This is because it lies 20 points behind the championship-leading #8 Toyota, and therefore is 20 points ahead of the 'virtual' last-placed car.

The Rebellion has been penalised solely with ballast, the car's minimum weight rising from 862kg at Shanghai to 882kg in Bahrain. This is despite the August explanation stated that the weight of non-hybrid cars would not be increased above 870kg.

This document included an original penalty co-efficient of 0.008s per point per kilometre, which was subsequently increased to 0.1255s ahead of round two of the 2019/20 WEC at Fuji in October. The new figure was not published in any FIA bulletin.

A full text of the regulations governing success handicaps is not contained within the series sporting rules and has so far yet to be published.