Motorsport.com staff selected as the 15th top moment the pull out of Peugeot's prototype contender that was to contest the World Endurance Championship and the 24 Hours of Le Mans. Reason given was “economic reasons”!

For five long years Audi was the underdog of endurance racing. When rivals Peugeot first arrived in 2007 they shattered the German marque’s lap times and fought them tooth and nail at Le Mans. Though that only materialized for the French once, they still beat Audi at the majority of support races and almost always over the course of a single lap.

So when Peugeot announced suddenly that they would not return in 2012 to continue the fantastic battle, there was a huge sigh of regret from sportscar racing’s fans, and a little breathe of relief from Ingolstadt. Le Mans 2012 looked like it was theirs. 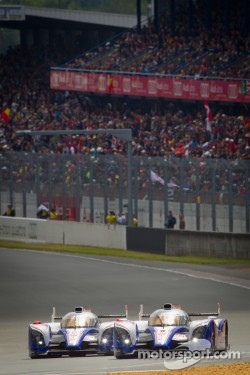 But then Toyota came along. Literally, then. They missed the first half of the year with crashes in testing and development delays, forgoing the 12 Hours of Sebring and Spa 1000km to make the TS030 car’s debut at the 24 Hours. No one could have expected their success.

Not that they were successful—crashing both cars fairly early on—but on the timesheets they were right amongst Audi’s armada of diesel and hybrid R18’s. The competition looked good. At Sao Paulo, in the team’s third race, they won. They led the next round at Bahrain before retiring, and finished the season with the final two race wins in Fuji and Shanghai.

So while Audi did get their easiest Le Mans win since 2007, it doesn’t look like they’ll get that same comfort ever again. Toyota will return, and will contest the overall victory. Thanks to them, sportscar fans have LMP1 racing again, and Audi has no relief.