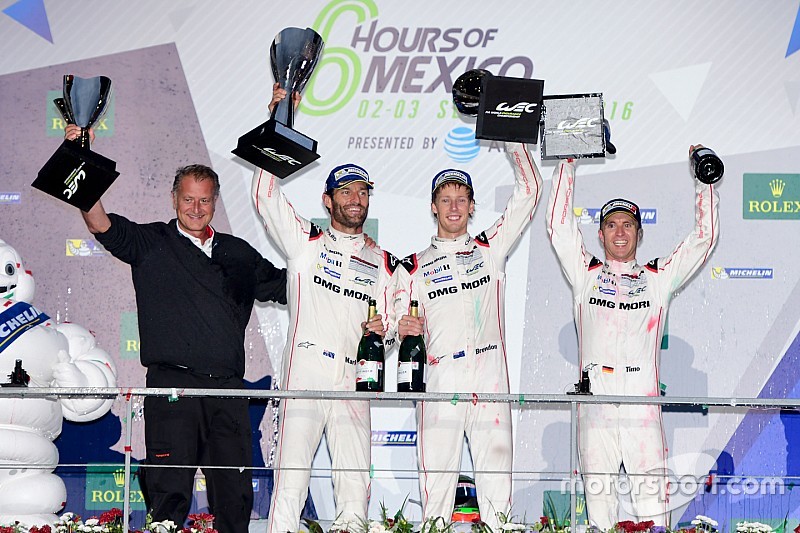 The race in Mexico was truly a successful debut for the FIA World Endurance Championship in Latin America, and provided for excitement from the get-go until the very last laps.

After the last race at the Nurburgring, everyone enjoyed the summer break and got some urgently needed R&R.

I went away on holiday with my family for a couple of days, which I thoroughly enjoyed. It was a very welcome break, because once the season starts my schedule is filled up and leaves little time to spend with family and friends and to recharge the batteries.

After a few weeks away from the cockpit I was looking forward to getting back to work. Despite the break, our team did a great job to prepare for the race in Mexico.

The high altitude of over 2,000m and the thin air put on an extra dimension and different challenges with regards to downforce and engine cooling.

We had a smooth start into the race weekend with a 90-minute test session for everyone to familiarise themselves with the special track conditions. I had known the track from our simulator in Weissach, and was really looking forward to Mexico.

I remember watching Formula 1 races in my childhood back in the day. The track has a wealth of motorsport history and the success of Pedro and Ricardo Rodriguez, whom the track is named after, remains unforgotten in Porsche’s racing history.

All our practice sessions went smoothly. We got through our planned programme without any issues, learnt a lot and got a good idea how we are going to set up for the weekend.

The track is somewhere between a city circuit and a permanent race track and has its very own rhythm. It has some tricky parts, and especially in traffic you have to be patient.

From what we saw in the practice sessions, all three manufacturers were very close together. Brendon [Hartley] and Mark [Webber] were on duty for qualifying and we saw an exciting four-way battle for pole between us and the two Audis.

In the end we qualified fourth, our sister car in second with the two Audis in between – all four of us only within 0.3 seconds!

The weather forecast predicted changing conditions with some rain in the later stages of the race. Brendon got a great start off the line, passed our sister car and moved up into second a few laps later.

When Mark took over during a yellow phase, he was able to capitalise on the restart and got past the #8 Audi to take the lead. He and Lucas di Grassi had a great battle and both came it at the same time for a stop. Our guys were faster though and I came out in front of the Audi.

My next stop co-incided with a full-course-yellow-phase, and the team wanted me to come into the pits straight away, however at short notice they decided to wait one more lap. Even though I had already passed the white line of the pit entry I rejoined the track.

The stewards handed us a stop-and-go penalty, which Brendon had to carry out later in the race and which handed the lead to Audi. However, he drove a very quick stint and was able to regain the lead.

Towards the last third of the race, it started to rain and we had to pit for rain tyres. When I was back behind the wheel, conditions had improved though, and I was able to continue on intermediates and pass the Audi again for the lead.

In the final 20 minutes of the race it started to rain again. Sector three was suddenly wetter than the lap before, and I had to catch the car on the wet curb and slide into the escape road. Luckily I didn’t touch anything, and was able to continue and bring home the victory.

It was a very tricky race all round – we had some good fights with the Audis and the traffic management and the weather threw some interesting variables into the mix.

Our team did a fantastic job to prepare the 919 Hybrid for these special conditions and the new track.

We made all the right calls and it’s great to have another win under the belt, and to have further extended our lead in the manufacturers' championship.

Next up is the Circuit of the Americas in Austin, in just over a week's time, where we’ll drive into the dark.