Toyota Racing took its first racing victory of the 2013 FIA WEC season at the close of the 6 Hours of Bahrain.

The No.8 TS030 Hybrid of Anthony Davidson, Sébastien Buemi and Stéphane Sarrazin won the race over the No.1 Audi R18 e-tron quattro of Lotterer-Tréluyer-Fässler. They were the only two LMP1 prototypes to finish a race of attrition. 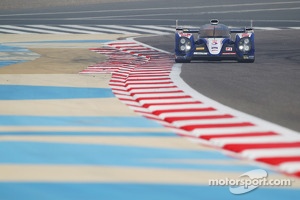 G-Drive Racing’s No.26 ORECA 03 Nissan won its fourth race of the season in the hands of Roman Rusinov, Mike Conway and John Martin, but second in class for the No.24 OAK Racing Morgan Nissan of Pla-Brundle-Heinemeier Hansson was enough to give the French team the LMP2 Teams title. Fourth behind the No.41 Greaves Motorsport Zytek Nissan of Wirdheim-Reip-Lancaster was the No.35 OAK Racing Morgan Nissan and that result was all that was needed to give Martin Plowman, Bertrand Baguette and Ricardo Gonzalez the LMP2 Drivers championship.

The final hour brought joy and success to Ferrari who not only won the LMGTE Pro race with its No.51 F458 Italia of Gianmaria Bruni and Toni Vilander, but also the World Endurance Cup for GT Manufacturers and the World Endurance Cup for GT Drivers for Bruni. This was, however, at the expense of Aston Martin Racing who suffered further heartbreak in the final hour when the No.99 Vantage V8 of Senna-Lamy-Stanaway was brought into the pits with a terminal engine issue. Second in class was the No.91 Porsche 911 RSR of Bergmeister-Pilet, ahead of the No.71 AF Corse Ferrari of Kobayashi-Fisichella.

Softening the blow for Aston Martin Racing was the double success of a race win for the No.95 Vantage V8 of Nicki Thiim, Christian Poulsen and Christoffer Nygaard and the sealing of the FIA Endurance Trophy for LMGTE Am Drivers’ title for Jamie Campbell-Walter and Stuart Hall. Second in class was the No.81 8Star Motorsport Ferrari and this result was good enough to give the American/Italian team the LMGTE Am Teams’ title.