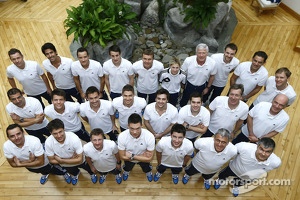 The provisional entry list for round 1 of the FIA World Endurance Championship, the 6 Hours of Silverstone, has been revealed with an additional three cars on top of the thirty-two full season entries bringing the total number of cars for the race at Silverstone on the 14 April up to thirty-five.

In LMP2 the twelve car full season entry is boosted by two additional cars from Oak Racing and Chinese team KCMG, with both teams running Morgan-Nissans. Delta-ADR and Greaves Motorsport are the two teams flying the British flag in this class and while most of the teams in LMP2 have yet to release their full driver lineups for the 6 Hours of Silverstone, British drivers include Alex Brundle (Oak Racing), Jonathan Kennard (HVM Status GP), Martin Plowman (Oak Racing), Ryan Dalziel (Starworks Motorsport) and Matthew Howson (KCMG).

In LMGTE Pro the driver lineups are almost finalized with just AF Corse to announce their second drivers for the nr51 and nr71 Ferrari 458 Italias. Porsche AG Team Manthey have announced three drivers in each of their Porsche 911 RSRs with Jorg Bergmeister, Patrick Pilet and Timo Bernhard in the nr91 car and Marc Lieb, Richard Lietz and Romain Dumas in the nr92 Porsche. The two Aston Martin Racing Vantage V8s will also have a strong lineup for the team’s home race with Britain’s Darren Turner rejoining Germany’s Stefan Mucke in the nr 97 car and Fred Makowiecki partnering Bruno Senna in the nr99 Aston.

The driver lineups for the eight full season cars in LMGTE Am are also almost complete with Krohn Racing, 8 Star Motorsports and Proton Competition still to declare their full crews for the 6 Hours of Silverstone. Jack Gerber (AF Corse), Stuart Hall (Aston Martin Racing) and 2010 RAC Tourist Trophy winner Jamie Campbell-Walter (Aston Martin Racing) represent the British interests in the LMGTE class. Matt Griffin (Af Corse) will also count Silverstone as his home race as the Irishman has lived near the track for many years.

Gerard Neveu, CEO of the FIA WEC, said: “This entry list represents a lot of hard work by everyone involved, the teams, the drivers and the manufacturers. We are extremely pleased to have thirty-five cars for the opening race of the 2013 season at Silverstone on the 14 April, which will feature the Royal Automobile Club Tourist Trophy for the first time.”

Kobayashi joins Ferrari for a season in FIA-WEC