Belicchi and Beche secured the 3rd place overall of a very special race hindered by a heavy rainy conditions.

Heavy rain was falling on Fuji Speedway when the start of the 6th round of the FIA World Endurance Championship was given under the safety car. Starting from the 5th place on the grid, Andrea Belicchi managed to keep the Lola-Toyota #12 on the track limits, dealing with aqua-planing and very bad visibility. After a first red flag of fifty minutes, #12 took third position with the #8 Toyota starting from pitlane and #1 Audi stopping to pit. After two other red flags, the race director red flagged the race for the final time, freezing positions.

Andrea Belicchi and Mathias Beche with their Lola-Toyota #12 secured the third place overall of a very special race hindered by a heavy rainy conditions.

This third place podium finish is the second podium of the week-end for REBELLION Racing, winner at Petit Le Mans – Road Atlanta a few hours ago. 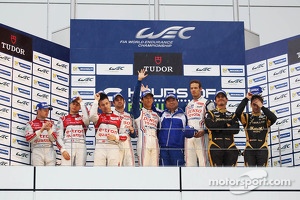 Andrea Belicchi : « It's a nice day for the team. The guys have done a good job winning at Petit. We are very happy for that. It's also something to win this podium here at Fuji. Obviously, it was not really racing but an Audi and a Toyota went to pit and we took advantage of it. For my first race after my crash, I couldn't dream more than a podium. But I would have to suffer a bit more for that, to push and to race harder to feel more tired after the race ! But the race director has taken the right decision. There was a lot of aqua-planing and no visibility. So it would be too risky to continue. Anyway, I feel that I have recoverd all my physical condition. I'm very looking forward to have a good race in China !»

Mathias Beche : « I have a mixed feeling. We went in Japan to race and fight on the track but heavy rainy conditions prevented it. The race director has taken the right decision. We had a very warmful welcome from Japanese fans during all the week. I'm a bit sad not to have given them a good fighting race. On the other hand, in motorport, you need sometimes to be a little lucky and we had some today. A podium finish is very good for the team. In a way, perhaps was it our destiny ? I'm looking forward to be in Shanghaï to race again... under better conditions !»

Ian Smith REBELLION Racing Team manager : « Our goal is complete today. Sportingly, it was not a great fight but we aimed to make no mistakes and this we achieved, under very challenging conditions. Gaining an overall victory at Road Atlanta and an podium finish here at Fuji, marks a great weekend for Rebellion Racing. The drivers and Team have done a great job this week, on both sides of the Pacific, and we now look forward to Shanghai.