Pierre Kaffer: "The ORECA 03 which is a reliable and fast car, the Nissan motor, and the Michelin tyres, we have a very solid package to be competitive.."

The ORECA 03 has realised a successful start to the 2013 FIA World Endurance Championship, taking two steps on the LM P2 podium at the 6 Hours of Silverstone, while also garnering pole position and fastest lap of the race. 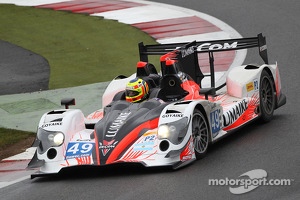 The hour has come to confirm these good performances for G-Drive Racing by Delta-ADR, current series leaders, and Pecom Racing, third place finishers in the opening race.

At Spa-Francorchamps, for a second round that doubles as a final rehearsal for the 24 Hours of Le Mans, three ORECA 03 will be at the start to take on the famous Belgian track.

John Martin (G-Drive Racing by Delta-ADR): "The ORECA 03 will be even quicker at Spa !"

With their two ORECA 03, G-Drive Racing by Delta-ADR left their mark on the 6 Hours of Silverstone: victory for the No. 25 of Tor Graves, Antonio Pizzonia and James Walker ; pole position and fastest lap of the race for the No. 26 of John Martin, Mike Conway and Roman Rusinov.

After this great start, the Simon Dowson-led team will be looking to confirm their form at Spa, a track where the team performed very well in 2012, finishing second in LM P2 and first among the FIA WEC competitiors.

John Martin, already part of the team last year, is hungry for the win. "We took pole position at Spa last year and I think we can do it again," he explains.

"I think the ORECA 03 will be even quicker at Spa than at Silverstone and it will be a great fight against our competitors. After our pace in England, we are looking for the win on a track which our drivers like and where I feel comfortable."

A standout performer at Spa in 2012 while discovering the discipline, the Australian this time needs to get to know his teammates, while G-Drive Racing by Delta-ADR enters another car for the complete season: "It’s good to have a second car. We can work a lot more on setups during practices and gather more data which can help for the race.

As for the driving squad, I still have to get to know my teammates. Our feeling for the car and the handling characteristics that we like are relatively close. I think that as the season progresses, we will get along better and better with Mike and Roman."

Experienced team, Pecom Racing has decided to keep things the same for 2013, with a car and driver lineup unchanged from last year. Nevertheless, the Argentinian squad had a busy weekend in England, with a start of race marked by an incident.

Far from giving up, the team charged ahead to finish the race in third place with an impressive drive from Luis Perez Companc, Pierre Kaffer and Nicolas Minassian. "Silverstone didn’t go quite how we were hoping," admits Pierre Kaffer.

"We changed tyre manufacturers during the off season and we logically need some time to adapt to the Michelins. The variable weather conditions didn’t help us either.

During the race, there was the get-together with a competitor, but the team reacted well and the mechanics came to the rescue quickly.

There is a lot of solidarity felt in this team: we lose together, we win together. Looking back, it was a good preparation for Le Mans. In a championship, sometimes you need a little luck and I think we came away decently with our podium finish."

Pecom Racing is therefore looking to score the series championship, their stated objective, as well as Kaffer’s: "Spa will be a whole other story," he explains: "I love this track, which is long and composed of all types of corners. The track willl suit us better, notably in terms of the tyres.

Also, the practice and qualifying sessions are on the same day. We all know each other well, and that will be a real advantage under these conditions! There won’t be much time to react and the team’s experience will be a pllus.

We’d like to take the win, but a podium finish is our primary goal. Spa is also another important step toward Le Mans. Even we know that the LM P2 class is very competitive, we remain confident: between Pecom Racing, the ORECA 03 which is a reliable and fast car, the Nissan motor, and the Michelin tyres, we have a very solid package to be competitive.."

Lotus Praga LMP2 preview to the 6 Hours of Spa