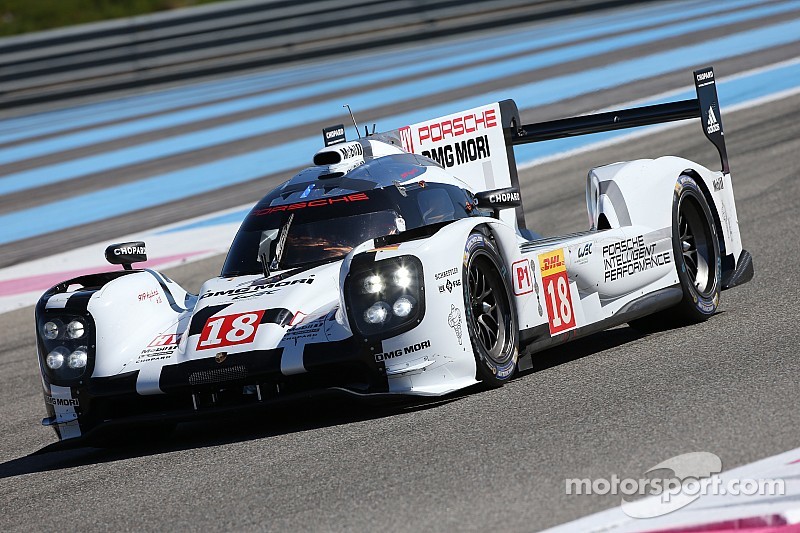 First podium finish at the Six-hours of Silverstone for the new Porsche 919 Hybrid.

Stuttgart - The driver trio of Romain Dumas (France), Neel Jani (Switzerland) and Marc Lieb (Germany) secured the first trophy for the new Porsche 919 Hybrid at the six-hours of Silverstone (GB). Sharing the number 18 prototype, they covered 201 laps and finished second in what was a thrilling and totally dry race.

During the first one-and-a-half hours of the opening round of the FIA World Endurance Championship (WEC) the two Porsche 919 Hybrids were even boasting a one-two. Mark Webber (Australia) started from pole position and had opened up a good lead when a gearbox problem forced him to retire the number 17 sister car. Dumas/Jani/Lieb took over the lead from their team mates, but later in the race had to concede the win to Audi by 4.6 seconds after a breath-taking battle.

How the race went for car number 17

Mark Webber started from pole and increased his lead to more than seven seconds during the first 23 laps. At the end of lap 24 he made his first pit stop and changed the tyres during a full course yellow. He continued with a strong lead until after almost one and a half hours into the race he was called into the pits because of a gearbox problem. He retired after 44 laps.

How the race went for car number 18

Romain Dumas started second on the grid and managed to defend his position until his first stop after 24 laps during a full course yellow. Marc Lieb took over and stayed in second place on fresh tyres until he moved into the lead when the sister car retired. After 53 laps it was the next stop for fuel, tyres and a driver change and Neel Jani got behind the wheel. From lap 58 onwards he was in a battle that was well worth watching with his fellow countryman Marcel Fässler in the Audi. They swapped the lead on numerous occasions before the Audi pitted at the end of lap 80. Jani stopped two laps later and handed the car over to Dumas, who continued in P3. After 112 laps Lieb got behind the wheel again and at the end of lap 142 Jani was back in the car. In the final stages of the race he was again chasing Fässler, but could not catch him in the end.

Fritz Enzinger, Vice President LMP1: “Second place is a great result for the season’s opening race after we managed to put both cars on the front row yesterday. For the crowd it is fantastic when the first three cars finish less than 15 seconds apart after six hours of racing. We have seen the most exciting battles today with a very special Swiss input. This opening round was a great promotion for endurance racing and for the WEC.”

Andreas Seidl, Team Principal: “Congratulations to the entire team. The crew and all our drivers have done a great job here. Our pit stop crew today was the best in the entire pit lane. This second place is a very good result for the 2015 generation of the Porsche 919 Hybrid, because Silverstone is the circuit that suits our car the least. Nevertheless we are leaving the paddock with mixed feelings, because we wanted to finish the race with both cars.”

Mark Webber (38, Australian): “It was really going smoothly, and I had a nice run at the front of the field. Then we had a drivetrain issue. I only felt it a lap before, but I couldn’t continue. It’s a real shame because we were in a great position. We had a really good build-up to the weekend. The guys worked hard, but we didn’t get the result. We were in better shape with the tyres than we thought we would be, and that was a nice surprise. Our hybrid technology is just sensational, it puts us in a good position in both the short and long term.”

Romain Dumas (37, France): “To begin with my first stint after the start was pretty good. But after about 15 laps I lost rear grip. On my second stint I was on the used set of tyres from qualifying, and this was even more difficult. However, we knew Silverstone wouldn’t be the easiest track for us, but we tried to make the most of it.“

Neel Jani (31, Switzerland): “This was quite an interesting race with great battles. Especially fighting with Marcel Fässler was good fun. This is what racing is for! It is a shame that in the end it didn’t work out for us to take the win when the leading car had the stop and go penalty. It became quite tight again. It is great that all three manufacturers are so close together. This is going to be an exciting season. In the end I was really able to attack with our Porsche 919 Hybrid. We have improved the car a lot since last year. There is still some work to do, but we are going in a good direction.”

Marc Lieb (34, Germany): “My second stint was clearly better than my first one. I got into the rhythm a lot better, and the car was less understeery and easier to drive, I felt a lot more comfortable. I was on a fuel save strategy and quite happy with the lap times I was doing with less power. Overall we still have some work to do, and I know our team will do everything possible so that we can be stronger in the next race.“